Strap yourself in and get ready for a brand new season of The Grand Tour. There were wild rumours banding around online about the show being axed by Amazon. However, the show's live studio recordings are underway so we will be seeing the team back on our screens very soon.

Clarkson, Hammond and May have been blasting around in supercars and pulling off all sorts of weird stunts exclusively for Amazon since 2016. Read our review on The Grand Tour here. Seasons one and two were great hits, but it seems a lifetime since they were up to their antics. 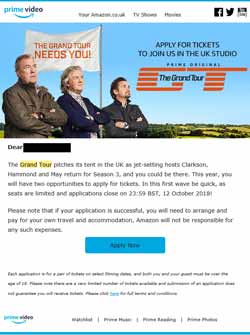 But today the first live studio recording is taking place. Three recording dates were released by Amazon for 31st October, 7th November and 21st November. Members of the public could apply to be part of the audience, choosing which date of the screening they would prefer.

The Grand Tour Facebook page has released images of the famous tent all ready and set for filming. So some lucky souls will be having heaps of fun with the team this Halloween watching all the fun. Let's hope there are lots of tricks and treats for us all!

What is clear from Andy Wilman (the show's producer), is that the audience will be following the guys across the globe. Filming has taken place in Azerbaijan, America, China, Mongolia and let's see what happens to Clarkson in Columbia.

All in all, things have been kept very quiet and tightly under wraps regarding the new series. Unsurprisingly, one or two leaks have surfaced. Officer Bobbie makes an appearance with Clarkson dressed up as a traffic warden. Giving out tickets for everything and anything which looks fun. There is also footage of the team carrying out a used car challenge with an Alfa Romeo GTV6, a Lancia Gamma Coupe and a Fiat X1/9.

That looks like a classic episode taking three unpredictable Italian cars on a 500 mile road trip – which will break down first? Along with the new series there is a release of The Grand Tour game so you can join in the fun from home.

Watership Down remake coming soon from Netfix and BBC
October 18, 2018

What Is A Netflix Limited Series? And The Best Ones To Watch
January 11, 2022