If you are old enough to remember the 1978 release of the feature film Watership Down, then your life would have been changed forever from the brutal scenes of these poor bunnies getting run over by cars, attacked by dogs, shot at… it was traumatising. The film was a huge success and brilliantly produced, the song ‘Bright Eyes' from the soundtrack topped the UK charts for five weeks and was a huge success globally.

The book was written by Richard Adams, published in 1972 it quickly became a modern classic and received multiple awards. This is a truly wonderful story that shaped and inspired a generation, well the film may have kept a few children awake at night after watching it, and it certainly had us all crying streams of tears. But this is a story of survival and friends on a heroic epic journey to seek a better life. The plot has been compared to Homer's Odyssey and is packed full of symbolism.

Well now it is time for a new generation to be inspired and yes, if it is anywhere near as direct as the 1978 feature, truly traumatised. Netflix and the BBC have joined together to bring us a big budget four part mini-series reportedly costing £20 Million for the project. 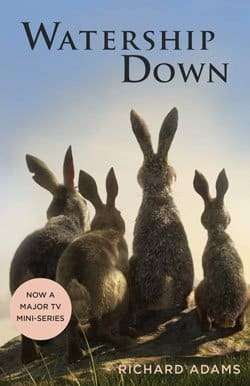 There is heaps of anticipation building around this new release. Fans of the book and the original feature film will have huge expectations. Adding to the anticipation, Netflix and the BBC are keeping tight wraps on any information. There are no teaser trailers yet, no official images of the animation and other than releasing cast members, they are being extremely secretive about the whole thing. But after a lot of digging around, yesterday someone posted the front cover of the new 2018 print of the book on twitter (pictured left). I really hope this gives us a sneak picture of the style of animation. If it is and they have created lifelike rabbits using the incredible CGI that is available today, then we are all in for a wonderful treat.

One thing that is clear – the cast looks fantastic. The character that scarred me for life was General Woundwort and the casting crew clearly wanted this character to have the same impact this time around because they have cast Ben Kingsley in the role. The brilliant James McAvoy is cast as Hazel and Nicholas Hoult as Fiver. Other cast members include John Boyega, Gemma Arterton, Miles Jupp, Mackenzie Crook, Freddie Fox, Craig Parkinson and Daniel Kaluuya. Now with a cast like that, it is clear that they mean business with this new production of such a classic.

The release date is set for Christmas Day 2018 – Expectations will be high and it is a bold move to release on Christmas Day. But I can not wait to see this and I know exactly what my family Christmas day will be scheduled around. Get out your tissues and get ready to go on a Lapine adventure that you will never forget.

Keep your eyes out for the Teaser Trailer – as soon as it is released we will be putting that up on our Trailer section for you to take a look at.