Hocus Pocus 2 is officially slated for release on 30 September 2022, and you're probably wondering where you can watch it?

I have good and bad news, sadly Hocus Pocus 2 will not be appearing on Netflix anytime soon. However, the good news is that the highly-anticipated sequel will be available to stream on Disney+.

The long-awaited second instalment to the beloved family film is finally happening, and all your favourite witchy sisters are returning.

Bette Midler (The Politician), Kathy Najimy and Sarah Jessica Parker reprise their iconic roles as the Sanderson sisters, and we can't wait to see what mischief they get up to this time around.

If you're not already a Disney+ subscriber, now is the perfect time to sign up. In addition to Hocus Pocus 2, Disney+ has an impressive lineup of original content, including shows like The Mandalorian and fantastic animated movies such as Encanto.

So mark your calendars now and get ready to see the Sanderson sisters back in action!

This will give you access to Hocus Pocus 2 and all the other great content that Disney+ has to offer.

What is Hocus Pocus 2 About?

This sequel is set twenty-nine years after the events of Hocus Pocus (1993). When three young women accidentally resurrect the Sanderson Sisters in modern-day Salem, they must quickly think of a way to stop the child-hungry witches from destroying the world.

Doug Jones will return to his role as Billy Butcherson in this film, the lover of Winifred. Sarah caught him cheating on May 1, 1693 and she poisoned him as a result. He is raised from the dead as a zombie!

The film is directed by Anne Fletcher, her previous directing credits include Dumplin' and 27 Dresses.

The original Hocus Pocus was not a big hit when it was released in 1993, but it has since become a cult classic. It currently enjoys a score of 6.9/10 on IMDB, and a 71% audience rating on Rotten Tomatoes.

It's safe to say that fans are eagerly anticipating the sequel, and we're sure it will be just as fun and magical as the first film.

Disney+ tends to produce high-quality content, so we do not doubt that Hocus Pocus 2 will be a hit!

Disney Plus has an impressive lineup of original content, along with brilliant Disney movies, you'll also get access to the Pixar catalogue (Toy Story, The Incredibles, Cars and UP) along with the Marvel Cinematic Universe (Black Panther, Captain America, Thor etc…) and not forgetting all the Star Wars movies and series.

Subscribers outside the U.S. also benefit from content which is normally only seen on HULU. Recently the new Predator movie Prey dropped on Disney+ for non-US viewers. Arguably making the streaming service a better deal for those not in the States.

You can cancel anytime so there's no risk, and you'll be able to watch Hocus Pocus 2!

Kids Where To Watch

Where to Watch Dexter New Blood? Stream It on Netflix or Amazon?
January 5, 2023 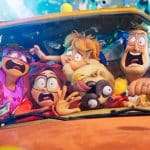