1917 is the Sam Mendes spectacular that was famously created using just two continuous shots. As war movies go, this birds-eye view of WW1 is simply stunning in every respect.

Director Sam Mendes has not made many films, but the films he has made have without exception been visually stunning. From his Oscar-winning debut feature film American Beauty, through his 1930s gangster thriller Road To Perdition, and his 007 big-budget bonanzas of Skyfall and Spectre, his name on the credits is a kitemark of quality. 1917 pushes the envelope a notch further by using that most impressive of cinematic devices, the ‘all in one shot’ technique.

Whilst Mendes is hardly the first to do this (see Birdman for a recent example and Hitchcock’s Rope for a not so recent one) the setting of the First World War makes such an approach all the more tension inducing (indeed, the tag line for the movie was Time Is The Enemy).

At the Western Front in northern France, British Lance Corporals Schofield and Blake (George MacKay and Dean-Charles Chapman) are tasked with hunting down the Second Battalion of the Devonshire Regiment to stop a planned attack due to start the next day. The German Army, believed to have been in retreat, has been discovered setting up a trap and if the attack were to go ahead the British forces will be massacred. As they leave the tent with their orders, so does the camera and so do we.

As this is WWI we get to track Schofield and Blake through their own trenches before having to make a cautious advance – alone – over no man’s land. Just because intelligence reports state that the Germans are no longer there does not make our lead characters slow walk through barbed wire, around rainwater-filled craters, and past numerous corpses any less stressful. MacKay and Chapman are excellent casting. Blake’s brother is part of the Second Battalion and his determination to press ahead echoes the determination required in his live stage performance for the central role in Billy Elliott. By contrast, despite MacKay’s youth he already is able to emote a world weariness that evokes the likely mental state of the predominately young and battered forces of the time.

Mendes and legendary cinematographer Roger Deakins use long unbroken takes and carefully planned moving cameras to make the film appear like it takes place entirely within 2 continuous shots (there are actually a few more but heck that’s impressive anyway). So we are discovering the battered terrain or surprises left behind in enemy trenches at the same time as our characters. This makes for some big moments, like a distant airplane dogfight that suddenly gets very close indeed, but similarly leaves room for the occasionally more personal connection. Listening to the chatter in a truck full of soldiers, or hiding out with a hidden French woman dodging German soldiers are examples of brief respites in a movie that is frequently edge of the seat stuff.

The continuous shot technique in 1917 provides a heightened reality where we are present every step of the way, but Sam Mendes still manages to create an otherworldliness in an astonishing segment where Schofield must sneak around a bombed-out village at night. The use of flares and smoke create a disorienting dream-like state which heightens the stress levels to a near unbearable crescendo. We as the audience are kept like a taut spring ready to release all our pent up energy at any second, something accentuated by Thomas Newman’s thrumming score throughout.

From a historical perspective it’s arguable how much effort WWI top brass would have gone to stop such an attack. We know all too well that the approach was more often to throw large numbers at any problem. But by following right behind the point of view of lowly soldiers veering from apparent safety to life and death decisions and back again over 24 hours, 1917 forgoes the wider picture in favour of the narrowest focus of all.

“Where’s your commanding officer?” is a desperate question asked several times only for the reply of “I don’t know! Over there?” shouted while evading fire. Everyday soldiers are not privy to bird’s eye views or the bigger picture. In this regard 1917 achieves what every good war movie should: those who make the ultimate sacrifice in the stead of those who send them do so with little hope of making any difference, except to advance the smallest of measures forward. 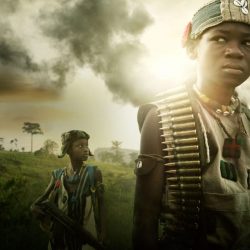