One of the all time great musical dramas, follow B-Rabbit as he makes his way through life in this gritty portrayal of growing up in Detroit while trying to make it in the Rap business. Sit back and just Lose Yourself in 8 Mile.

When it was released back in 2002 (yes, it really was that long ago!), 8 Mile was a huge success at the box office. It went straight in at the number one spot, taking $51 million in it's US opening weekend.

And the Eminem train just kept rolling on with 8 Mile notching up an incredible $242 million worldwide. And an additional $75 million from the DVD sales and rentals when it was released in 2003.

Eminem even won an Oscar for Best Original Song at the 75th Academy Awards. It was for the single ‘Lose Yourself' and he became the first hip-hop artist ever to win an Academy Award.

The film is a gritty look at the difficulties faced with growing up in the 8 mile road that links Detroit and Wayne County.

The story was based loosely on Eminem's life. Though there was probably some artistic licence taken to increase the drama of the film. T

hat said, he doesn't appear to have had an easy time of it so it's probably closer to the truth than most would like to believe.

The film itself follows B-Rabbit as he tries to make it in the music business. He competes in local rap battles with mixed success. He does this while holding down a job in a car factory and living at home with his alcoholic mother and little sister.

This is a movie that could easily have been quite depressing. In some parts it is, but what the makers got absolutely spot on was the over riding feeling that things can get better.

No matter what the circumstances or how dire B-Rabbit's life seems, you root for him. You become invested in genuinely wanting him to succeed and make the right choices in life.

While he may not be a typical movie hero, you want to see him win. The epic soundtrack that accompanies the film is such a fundamental part of the story that it all gels perfectly.

It is a film that has stood the test of time. It may be years since it was released but even now I, and probably millions of others, can still sing every word of Lose Yourself so if you fancy a trip down memory lane, 8 Mile will take you there. 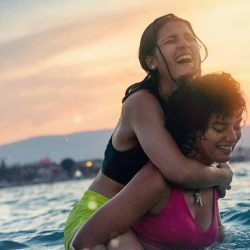