Age of Samurai chronicles Japan's journey from feuding kingdoms to the birth of a unified nation. The epic tale is told with dramatic reconstructions, stunning costumes and expert narration.

I must confess to knowing almost nothing about Japanese history. I could tell about the Vikings, the War of the Rose and the Court Of Louis XIV as I studied them in school and watched documentaries covering these significant times in European history. However, I couldn't name a single famous Japanese figure from the 16th or 17th Century.

I suspect most Americans and Europeans have a similar gap in their historical knowledge, which goes a long way to explaining the appeal behind ‘Age Of Samurai – Battle For Japan'. As Westerners, we don't know anything about these fantastic stories, battles, or political intrigue.

For me, this period resembles King Alfred's struggles to unify England's various kingdoms under one banner in the 9th Century. As such, it's full of family disputes, betrayal, madness, murder and grand battles.

As a primer to Japanese history, ‘Age Of The Samurai' is accessible to everyone. The complicated family allegiances and political complexities are untangled and explained entertainingly. I've read criticism that focuses on details the show gets wrong. I would suggest that compressing 100s of years of history into six 40-minute episodes will occasionally lead to errors or omission.

The series is fundamentally entertainment; many Docu-series suffer from the same criticisms levelled at ‘Age Of Samurai'. In an attempt to keep the show engaging, artistic liberties are taken with facts. But, if you don't know anything about the period, it won't spoil your enjoyment of the series. I really don't care if a specific piece of armour wasn't used until ten years after an event depicted in the series. However, it seems to trigger some people online.

While watching the series, I couldn't help thinking that a couple of the stories would make incredible historical dramas. In a similar vein to Amazon's Vikings or The Tudors – Come on Netflix! Please give us a Japanese version of The Last Kingdom!

Lavish costumes, beautiful scenery and epic battles elevate this series above the standard Docu-Drama offering. Age of Samurai is a great way to learn more about Japan's fascinating history. 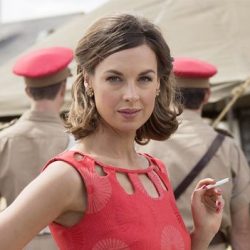