CIA Agent Henry Pelham has been tasked with finding a mole who helped a terrorist attack on a plane eight years earlier in All The Old Knives, an old-school spy thriller.

We are very accustomed to high-octane spy thrillers, but All The Old Knives is much more of a quiet old-school espionage story that has divided viewers.

If you want action packed this movie is not for you. However, if you want a decent story with a few twists and turns along the way then maybe this is more your lane.

So what is All The Old Knives about? It's 2012, and the CIA has a base in Vienna. When they get a tip-off that an airline will be hijacked, the race is on to find out when and where.

However, despite their best efforts, they are too late to save the 120 people on board flight 127. We then fast forward eight years to 2020.

Henry Pelham (Chris Pine) meets with his old boss Vick Wallinger (Laurence Fishburne), who tells him that their main suspect, Ilyas Shushani, a Chechen and former informant for Henry, was involved.

Not only that, but before he died, Ilyas confirmed that he had inside help with plotting the terrorist attack. There is a mole in the department.

The now married and retired Celia meets Henry in a Carmel-by-the-sea restaurant after he reaches out to her and asks her to dinner. It's time to find out what Celia knows.

As she relays precisely what happened on that fateful day, the story of flight 127 is played out over multiple timelines as Henry gets to the bottom of who is the CIA mole.

All The Old Knives Official Trailer

Is All The Old Knives Worth Watching?

All the heavy lifting in this spy thriller is done by Chris Pine and Thandiwe Newton.

Other than the flashbacks to various timelines, most of the story is told by them sitting in a restaurant. And despite the premise being very good, All The Old Knives is as much about their relationship than anything else.

The former lovers angle adds another layer to the movie but also detracts from it until you figure out how it ties into the plot.

In the end, the entire story gets resolved as all the pieces you've watched over the previous hour and 40 minutes fall into place. So there is a beginning, middle and an end, all wrapped up nicely.

All The Old Knives is very much one of the dialogue driven spy thrillers. You don't get gun fights, bombs and car chases. Instead, you get a pretty engaging whodunit and, more importantly, why.

Where To Watch All The Old Knives

All The Old Knives is an Amazon Studios movie.

It was released in limited theatres across the United States, and you can stream it now on Amazon Prime Video.

All The Old Knives Cast

Credit where it is due; while some of the cast didn't get huge roles, everybody does a sterling job in the movie from director Janus Metz.

Laurence Fishburne as Vick Wallinger, head of the CIA station in Vienna

Abdul Alshareef as Suleiman Abdulwahed, responsible for the terrorist hijacking 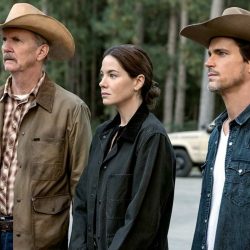