Set five years before the events of Rogue One, Andor follows Cassian Andor, a thief who becomes a revolutionary and eventually joins the Rebellion in opposition to the Galactic Empire.

A long time ago in a galaxy far far away there lived billions upon billions of people who had nothing to do with the Jedi, the Skywalkers, the small green and grammatically challenged, or deep voiced cape wearers pursuing their kids across an infinite void. Star Wars has traditionally lived in the high meggers. Andor – thankfully – cleaves through the ground level reality.

Shows like The Mandalorian wove a flavour of the everyday by having a bounty hunter always on the verge of ruin, but still relied on slotting this in within lightsabres and the Force.

Within its opening salvo of episodes, Andor portrays a world more universal, where refugees are targeted and all live under the boot.

In the mind of this reviewer, Rogue One was the best Star Wars movie outside of the original three thanks to a bittersweet grounding that shone a light on the “many [who] died to bring us this information” (ok ok that line wasn’t technically about the events of Rogue One, but the sentiment is the same, alright?!).

In Captain Cassian Andor (Diego Luna) – a Rebel Alliance spy with far dirtier hands than the likes of a Skywalker – the movie shone through with doomed determination.

What Is Andor About?

Five years before Rogue One life is not going well for thief Cassian Andor. While hunting for his lost sister he falls victim to a shakedown by two sketchy guards.

As a Kenari refugee, Andor is picked out due to his accent (the insults used are a powerful parallel with Luna’s Mexican nationality) but it all goes wrong.

Andor, on the run, must cash out and flee the planet Ferrix where he has been hiding out.

Ferrix gets intrigue points straight off the bat by virtue of not being Tatooine (huzzah!). Easy win aside, Andor paces its opening episodes well by not planet hopping.

Ferrix hardly gets a deep dive (lots of scrap, sweaty workers wielding, etc) but its general atmosphere of grinding out a living outside of space opera glitz is a welcome change of pace that allows us some time with our characters.

Diego Luna brings more of the powerful urgency that underscored his character in Rogue One, but here is directionless and focussed on his own survival.

After his assault on the two guards, Deputy Inspector Karn (Kyle Soller) takes it upon himself to hunt Cassian down. Soller’s performance is exemplary and anyone who has watched the recent Poldark series will know how much he can use seething arrogance to barely cover up vulnerable insecurity and desperation to be acknowledged.

The Star Wars TV shows frequently lack interesting antagonists, but in Soller they have one in spades.

Is Andor Worth Watching?

Even with such slow and deliberate pacing there a few elements that get cast aside in favour of set up.

Cassian and Soller light up the screen but as a mechanic with black market connections, Bix (Adria Arjona) suffers from the familiar problem of being defined by her relationships rather than having any distinct agency.

Some plot threads are introduced only to dangle, also. Cassian’s hunt for his sister, which kicks off the entire plot in the first 10 minutes, isn’t remarked upon again during these first few episodes.

Lies unspooled like a plot thread that should be wound tightly and flashbacks to Cassian’s life as a child on Kenari time jump, such that the end of episode 2 and start of episode 3 hardly seem to connect at all.

Yet so long as set up pathfinds into pay off, Andor starts by carving away with bright sparks. Stellan Skarsgård’s trademark gruff approach sows seeds of the sewer work needed for the world of practical spy craft and Fiona Shaw, as Cassian’s ‘adoptive’ mother brings the dignity that saw her sparkle in Killing Eve.

The most intriguing element of exploring the backstory of a character where their end point is most definitely known is that there is room to flesh out a whole journey.

The first season of Andor is 12 episodes – an unusually long run time in this day and age – which promises to encapsulate both Cassian’s journey and the coalescence of the Rebel Alliance.

With weary people banging metal in alarm, Andor finally takes Star Wars away from bloated nepotism to take a look at what happens when its people refuse to shine the leather of the oppressor’s boot. 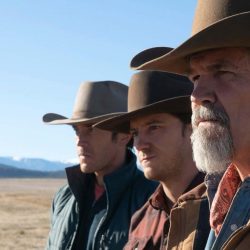