We've all seen the comedy horrors, but have you seen them set at Christmas and as a musical?? I didn't think so. That's why Anna and the Apocalypse is such a fun and unique genre mash-up for those with a sense of humour.

You’d think by now that we’d be immune to the intrigue a genre mash-up movie can provide. Smooshing together the words ‘comedy’ and ‘horror’ is almost old hat, even if successfully delivering on the promise remains difficult. Shaun Of The Dead may have perfectly blended ‘rom-com-zom’, but what if you were to add more genre nouns? Affix to your bog-standard ‘comedy horror’ tag the additional describers ‘zombie’, (still normal), ‘Christmas’ (pardon?), and ‘high school musical’ (wait, WHAT?!) well, then baby, you’ve got a stew going.

Set in Little Haven, Scotland, Anna and the Apocalypse eases in with well-worn zombie horror tropes. The opening act has the usual background hints that something Is Not Right with news bulletins mumbling about a mystery plague. As par for the course, the core cast is introduced and their motivations laid out. And yet the Christmas talent show backdrop and bursts of song and dance quickly make you lurch up and take notice that Anna is a movie gleefully jumbling up its constituent parts to stitch together a gory sing-along chimera.

Anna Shepherd (Ella Hunt), hurting after the death of her mother, is tired of living in a small town. Her plans to take a year out traveling Australia after graduation are met with exasperation by her doting father (Mark Benton), and dread from her best friend, John (Malcolm Cumming). Along with sarcastic wannabe journalist, Steph (Sarah Swire) and PDA duo, Chris and Lisa (Christopher Leveaux and Marli Siu), Anna has to cope with authoritarian deputy headmaster, Mr. Savage (Paul Kaye from The Stranger) and arrogant beau, Nick (Ben Wiggins). Life is hard enough as it is for these teenagers. How could it get any more biting?

There are always going to be bags of fun when it comes to inventive ways to dispatch zombies. Obvious highlights such as a splatter soaked bowling alley battle and Anna’s sharpened giant decorative candy cane weapon ensure that gore fans are tossed tasty hunks to chew on. Where a movie such as this will stick with you is in the characterisation and for the most part, Anna pulls this off. Ella Hunt mixes defiance and youthful exuberance with vulnerability as she tries to figure out life post-high school. From clean start to blood-soaked finish her presence drives the movie forward and the bond between her and John is a sweet thread that keeps you caring.

The other characters are more thinly sketched but colour in the scenes with fun broad strokes. It is disappointing that Steph struggles to break out of a stock ‘sardonic wisecrack’ cut out. Her grumpy complaints are supposed to be tempered over heartbreak about an absent girlfriend, but there isn’t enough meat laid on those bones to elevate her beyond ‘moaner’. However, this is contrasted with perma-chipper Chris and Lisa so the mix wins out.

Anna and the Apocalypse makes no bones about its inspirations whether they be overt homage or thematic tone. The song and dance sequence in which Anna and John start their morning in high spirits with headphones in, utterly oblivious to the undead chaos lumbering around them, certainly nods hard to an iconic scene in Shaun of the Dead. The musical numbers are equal parts High School Musical and The Rocky Horror Picture Show, and the movie certainly shares DNA with elements of the “Once More With Feeling” episode of Buffy The Vampire Slayer.

To reduce Anna and the Apocalypse to its constituent parts would be to do it a disservice though. The musical ingredient isn’t used willy-nilly. This is a full-blown musical with wonderfully choreographed numbers that are genuinely toe-tapping. Songs such as, “Break Away”, “Hollywood Ending”, and “Turning My Life Around” are both sing along and, crucially, important to the plot by way of revealing character feelings and motivations, whilst “It’s That Time Of Year” and “Give Them A Show” keep those Christmas jingle bells a-jangling. Stand out banger “Human Voice” is the kind of beautifully powerful and evocative song that any musical on Broadway would kill for. Just perhaps not whilst wielding a giant stabby candy cane.

The Christmas element is, truthfully, the least pronounced. The movie may be set during Christmas and joyfully displaying all the trimmings, but lacks the festive cheer message that would really breathe some Ho Ho Ho into the No No No. But this isn’t a swing and a miss on the part of the movie, more a sleigh bell dressing that gives everything an extra unique flavour. In this monster of a year where people are going to struggle to gather together, a movie that celebrates attacking adversity head-on with a song in your heart may be a much needed welcome reprieve. 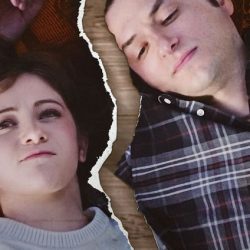