A brilliant fly on the wall sports documentary following the journey of Anthony Joshua as he prepares for the fight of his life. The new young hope of heavyweight boxing against arguably one of the greatest boxers in this division ever - Wladimir Klitschko.

The brutal sport of boxing has produced some legends over the years. But it is the heavyweight division that holds the biggest prize of all. To be the heavyweight champion of the world brings instant fame. It is the pinnacle of the sport. True greats of the sport include Muhammad Ali, Joe Frasier, Rocky Marciano, Lennox Lewis and Mike Tyson. And, of course, there is Wladimir Klitschko. He dominated the heavyweight division for over ten years. It was even known as the Klitschko era. A true super champion.

The sport of boxing is popular across the world, but in the UK it is extremely popular. Many world class fighters have come out of the UK across all divisions. Some dominated their weight class for long periods of time. But if you show any sign of promise in the heavyweight division in the UK, the media goes wild. The pressure put on these guys is insane. Fighters like Henry Cooper and Frank Bruno became instant celebrities whether they liked it or not. And each time one of these hopefuls got to fight for a belt the hopes of a nation would sit on their shoulders.

Many of the greatest boxers in history won Olympic Gold before going on to dominate professionally. Ali, Lewis and Klitschko all did this. So when Anthony Joshua won Olympic Gold in 2012 on home soil at the London Olympics, people started to take interest in this new hope. He turned pro a year later and set off on a blazing career. He became British Champion (2015), IBO Champion (2015), IBF Champion (2016) and after eighteen amazing fights he had the chance to become the WBA Champion too. All that stood in his way was the pressure of a nation and one of the greatest heavyweights of all time – Wladimir Klitschko.

For over two years the BBC followed Joshua. After his fight to Dillian Whyte in 2015 the production team followed his every move. What resulted was an incredible and very intimate documentary called Anthony Joshua: The Road to Klitschko. What we have here is a clear and open picture of who Anthony Joshua is. He comes across incredibly well, avoiding a bad guy image. Joshua is incredibly humble, clear in his direction, respectful and thoroughly charming.

The world gets to see how grounded he is and more importantly if he has the attitude to rise all the way to the very top. The documentary is brilliantly shot and well directed. The tension all the way to the fight and its conclusion is palpable. This is an emotional journey for both boxers. Not to mention the dedication needed to get into a ring, in a stadium of 90,000 fans, with millions watching across the world.

For me though, the greatest part of this excellent sports documentary is that it is clear that both of these champions are true sportsmen who love the sport. I watched the actual fight and thought it was one of the greatest fights I had ever seen. But was blown away by how much respect each fighter showed to the other.

When the reputation of the sport had become somewhat tainted, here we had two real sportsmen fighting not just for the championship but for the respect of the sport too. So if you are a fan of the sport but like me had become a little disenfranchised with the whole show; watch Anthony Joshua: The Road to Klitschko. It gives us a picture of how the sport should be and more importantly – in the hands of Anthony Joshua, what the sport of boxing could be.

UPDATE: Anthony Joshua: The Road To Klitschko is no longer available on Netflix. As soon as it becomes available again we will update the page. You can, however, purchase it on Amazon Instant Video. 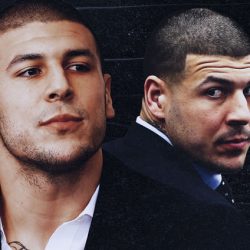 Killer Inside: The Mind Of Aaron Hernandez
January 20, 2020