Las Vegas is under siege from zombies but where there are casinos there is money and a group of mercenaries wants to pull off the greatest heist ever attempted in Army of the Dead.

Nothing quite feels like an opportunity to be let off the leash like a zombie movie. Director Zack Snyder may have exploded into our collective consciousness with the gloriously ludicrous 300 but his output since has consistently split opinion, and numbed a fair few backsides (Snyder Cut Justice League is *how* long?).

With Army of the Dead, dubbed a ‘spiritual successor’ to his patchy 2004 remake of George A. Romero’s seminal 1978 Dawn of the Dead, Snyder delivers two and a half hours of blood soaked zombie splatter where fun just about overrides any suggestion of common sense.

Army of the Dead makes the wise choice to mangle together another infected genre: the heist movie. After a rather adult-oriented convoy smash-up on the outskirts of Las Vegas, a super-strong, intelligent, and infectious creature rips apart the soldiers transporting it. A joyfully nasty montage ensues showing how the city is quickly overrun with infected / zombies / whatever and has to be utterly sealed off by the government in preparation for nuking the place off the map. Yet, this is Vegas, with casinos stocked to the brim with cash just sitting there for anyone determined enough to get it.

Led by Scott Ward (Dave Bautista, My Spy), a gang is put together to pull off the heist. Snyder does just enough with his characters so that even though they are pretty cookie cutter (the sarcastic one, the self-confident one, the nasty one, the underdog one, etc) we understand where they are coming from quickly and they perform efficient scene filling roles once things go predictably wrong.

A particular delight is the burgeoning friendship between childish and inept German safe cracker Ludwig (Matthias Schweighöfer) and weapons expert – so long as that weapon is a massive circular saw – Vanderohe (Omari Hardwick). It’s slow. It’s sweet. It brings some emotion into things.

What falls flat, I’m sad to say, is the father-daughter reconciliation central emotional hook between Scott and Kate (Ella Purnell), largely due to Bautista’s rather leaden facial performance. The beats between them are standard but Bautista doesn’t manage to make it a back and forth process, leaving the arc to be amped up by Purnell during her ‘mad at Dad’ moments. A solid emotional hook is the difference between a turn your brain off popcorn muncher and something deeper, so failing on this count doesn’t ruin the movie, but robs it off being something more.

What Army of the Dead *is* though is a triumph of chucking everything at the screen and cackling as it all goes red. When it comes to the zombies we are sort of in I Am Legend territory here insofar as above the shuffling grunts there are intelligent Alphas with ‘Zeus’ as their leader and a crown laden Queen sniffing around the perimeter to keep her territory. Much of this serves to delay the big fights throughout the middle of the movie with talks of ‘offerings’ and some Aliens style ‘but what if we could *use* these creatures?’ idiocy. It also serves to ensure that we get a series of increasing set pieces that ram, splat, rip, tear, and gnash at you with gleeful abandon.

Snyder makes an attempt to weave in some social commentary but this is no Romero movie. People disbelieving the ‘fake news’ of the existence of zombies is about as surface level as you get, and the pandemic references (including forehead zapping thermometer guns) are hardly making any kind of point that you can’t see from looking out of your window. Vegas as a setting allows for a celebration of the gaudy, be it through decaying cabaret dancers or a much-advertised zombie tiger, but any sneaking suspicions of some kind of capitalism or greed finger wagging is quickly forgotten. We’ve come for the action, not the subtly. Which is a good job because there isn’t any.

Does the movie need to be two and a half hours long? Probably not. However, it times the big moments well and has enough of a deck of cards of characters that it can shuffle around them to never really feel like it’s dragging. Sure, a few sub-plots fall flat (the abusive guard guy comes and goes, then comes back and goes again in a bit that suggests some editorial chopping was made) but, you know what? To hell with it. Army of the Dead is fun. It holds back a little on the gore to keep from going full out horror but saves the gristle and bone for enough choice moments to keep the action/heist/zombie gumbo bubbling over. It’s got visual flair, lashings of claret, and a cast to enjoy seeing their numbers dwindle. Get yourself some snacks and end the evening as an army of the fed. And don't forget to check out its prequel – Army of Thieves! 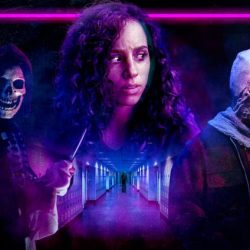