A serial killer is on the loose but when John Doe wakes up from a coma with total amnesia, he discovers that the police think it is him. Now he must evade capture and prove his innocence. Awake is the kind of crime thriller that ruins itself by being too obvious and formulaic.

Starring Jonathan Rhys-Meyers, Awake is a crime thriller that tells the tale of a car crash victim who is pegged by the police as a serial killer. The twist is that the patient has amnesia and doesn't even know who he is. So is he a killer or is this a case of mistaken identity?

The story starts with a close up of a recently murdered young woman. The killer is still there placing a phone in her hand. Then we move to Rhys-Meyers driving along until he is pushed off the road by another vehicle. Waking up in hospital after a coma he has no idea who or where he is. But as we move through the film it becomes evident that there is a serial killer on the loose and John Doe was driving the latest victim's car, with her body in the trunk. Aware that he is in dire trouble, John Doe escapes from the hospital, holding his nurse Diane (Francesca Eastwood) hostage. However, she believes he is innocent and the two go about trying to prove it.

Awake has a decent plot and plenty of twists and turns and if you're stuck for a bit of a thriller it passes the time. However, there is a lot wrong with it. Plot holes absolutely pepper this movie. Firstly, John Doe has his face almost completely bandaged yet, when he takes them off when he's on the run, he basically has about two cuts to his face. Even when the detective comes running into the hospital screaming about him being a murderer, he doesn't ask for them to be removed so he can figure out who this guy is. Put it this way, even a quick finger print search would have identified him.

Secondly, there are few characters in this film so when one minor character gets far too much screen time you know what's up. So there goes any real twist to the film. Basically, what starts off as an interesting, even intriguing film, turns predictable and just a bit meh. I like Jonathan Rhys-Meyers and with a better script, he would have had a lot more to work with. It's a real shame because Awake had promise, it just didn't materialise. 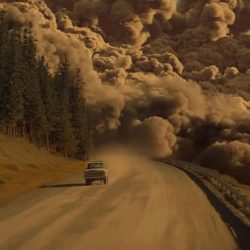