Don’t look. Don’t you dare look. One glance at one of these – somethings – and you will irrevocably be compelled to immediately kill yourself, violently. Bird Box puts us in the thick of Mallory’s desperate fight to survive in this excellent Sandra Bullock movie.

Don’t look. Don’t you dare look. One glance at one of these – somethings – and you will irrevocably be compelled to immediately kill yourself, violently. If opening scenes are markers for tone then as Bird Box’s opening monologue starts you know immediately that this is going to be a tense movie.

Sandra Bullock stares direct at the camera, giving very specific and harsh instructions. You do not remove your blindfold under any circumstances. Take off your blindfold and you will die.

Except as the point of view switches we see she is talking to two 5 year old children, and they need to travel for nearly two days via a small boat to a possible refuge.

After the initial scene, the timeline flashes back 5 years where Mallory (Bullock’s character) is pregnant but ignoring it. Her flippant remarks bounce across the few opening scenes before, in typical zombie movie fashion, the ‘mass suicides’ covered on news reports start happening around her.

The chaotic stampede ensues and it becomes clear that people are seeing things that drive them to take their own lives. Mallory takes shelter in the first house that is available and finds herself surrounded by a disparate cast of people stuck in a similar situation.

The casting in Bird Box lashes together many popular actors you’ve seen in other recent movies. There is Rosa Salazar (The Maze Runner), Lil Rey Howery (Get Out) and Trevante Rhodes (Mike).

Alongside them are more established fare like the permanently sour John Malkovich or oft comedy foil of Tom Hollander (although definitely not comedy here). That said, it is a shame that most of them don’t get a lot to do.

There is one quick panicked conversation where they all seem to immediately figure out the rules for survival but beyond this virtually no-one grows beyond their one note template established early on.

This is a problem that many movies of this genre have: the need to group survivors together and then pick them off as time passes.

Some performances do stand out. Rhodes’ nice guy under pressure angle mixes well with Bullock’s hard edge pragmatism. When a desperate and dishevelled Hollander is let in to the house half way through, his haunted features add a fresh injection of ‘outside’ to the cooped up residents. And as the movie progresses the time frame jumps back and forth from these holed up survivors and the danger fraught river crossing that Mallory and the two children are making.

The children, simply named ‘Boy’ and ‘Girl’ by Mallory, have very little to do rather than just be vessels for rescue and protection. This is understandable given the young ages of the actors. But there are some gloriously heart-wrenching moments with them. Once the river turns into potentially lethal rapids Mallory coldly informs them that one of the children is going to have to take off their blindfold and navigate. She repeatedly says that she is the one who will decide which it will be. They take cover under a blanket and the pain on Girl’s face (Vivien Lyra Blair) as she watches Mallory struggle to make a decision is a superb and upsetting performance.

Whilst the character interactions are somewhat arbitrary, the never seen ‘threat’ is certainly nail biting stuff. We are constantly shown blindfolded POV as Mallory blindly fumbles her way past dark and whispering shadows. A rustle of leaves and a feeling of dread precede their appearance (and, in one scene, the proximity sensors of a blacked out car!) and voices on the wind implore that you just take a quick peek, just take off your blindfold to see….

Later, the threat is increased as we meet some humans who were not driven to suicide. But instead hunt down the survivors and force them to open their eyes. A throwaway line implies that said people are escaped inmates from a mental health hospital, but it is never really clear quite what the logistics of this is supposed to be. Apparently, birds can sense these types of people and act as an early warning system. Again, the effectiveness of this is a bit hit and miss but regardless, it adds extra danger to our remaining group.

One of the main problems with Bird Box is a lack of sense of time. Presumably the characters are all stuck together for many months initially (and years, later) but as there is no character development the parts in the house could just be a series of unconnected scenes. And when we have already opened the movie to just Mallory plus Boy and Girl, then some of the tension is gone because we knows it’s a matter of if, not when, everyone else is going to meet some kind of end.

Indeed, the parts on the river are so edge of seat, that when we switch back to an argument about food in the house it can feel like a disappointment. There is next to no weight of close proximity or development of coping mechanisms. The scenes in the house just continue with little to add rather than killing time until things go south.

Regardless of some plot holes and pacing issues, the core concept of Bird Box is so creepy that this, combined with a commanding lead from no-nonsense Bullock, makes for an enthralling film. Malkovich is billed highly but even though he is swilling alcohol and doing his usual grumpy old man shtick (the scene when he ticks off the reasons his past wives have left him is a winner) he does it well.

The direction from Susanne Beir (who also directed The Night Manager) focuses on the fear of Mallory effectively. We are often Mallory’s limited sight; we are in the thick of Mallory’s desperate fight to survive; and we are right there as she blindly gropes for the missing children through a forest teeming with danger. The camera keeps us in the dark as much as the characters and our fear is kept palpable as a result.

Netflix have claimed that 45 million accounts have watched the movie in the opening 7 days: a record breaking feat. Notoriously cagey about subscriptions and figures, Netflix’s release of these statistics is unusual although quite how these figures work is unclear (does just watching the first 20 minutes count?). In any event, Bird Box has generated quite a buzz online and it’s easy to see why. Everyone can experience the nail-biting moments within days of each other and word of mouth is strong. Sandra Bullock may be desperate and blindfolded, but you won’t be able to look away. 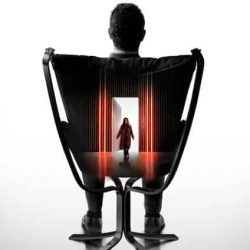