Natasha Romanoff aka Black Widow is faced with a dangerous conspiracy tied to her past and must deal with her history as a spy and the broken family relationships she left behind before she became an Avenger.

What a lightning rod Black Widow became. Fans of the Marvel Cinematic Universe clamoured noisily for a solo movie for the one Avenger whose only ‘power’ was ‘being totally kick ass’, and eventually Disney obliged.

Except there was a pandemic closing off most cinemas. And Marvel films are by design on a strict release formula. And Disney dropped the movie on streaming which undermined the cinema exclusivity window. And Scarlett Johansson (one of the highest-paid women in Hollywood) sued for breach of contract as her fee was linked to box office performance. It’s hard to switch off the drama and just watch what is, in Marvel terms at least, an oddball movie.

Starring Johansson in her final performance as the lethal assassin Natasha Romanoff, Black Widow squeezes into the MCU timeline somewhere between Captain America: Civil War and Avengers Infinity War, when Romanoff was on the run and alone from her super-powered colleagues. Yet, as the movie’s intro shows us, she has a ‘family’ of sorts. If for ‘family’ you mean ‘Russian Sleeper Cell Unit’ that fled the U.S. when discovered in 1995, with Romanoff just a girl and struggling to protect an even younger ‘sister’ under her wing.

Considering anybody who has followed the MCU movies will know how Natasha’s storyline ultimately ends up, this chunk of past life works hard to inject some vitality. Enter Natasha’s heavily tattooed and bombastically self-centred ‘father’ (Alexei / David Harbour), and churlishly pouting but equally lethal ‘sister’ (Yelena / Florence Pugh). The interplay between these three makes for sparky fun, with Pugh wringing every moment out of her lines, and Harbour clearly loving his larger than life persona.

Outside of character work Black Widow is an unusually sombre affair. Cate Shortland’s direction takes slow stock of Natasha’s position in the first act. Virtually friendless, with no equipment and no prospects, she has to stay under the radar in a disused caravan and try to pick up assassination work. Johansson relishes the time to slow down and breathe with her character, allowing her expressions to betray more emotion than she would in the company of others. As the only central character without any kind of superpower beyond her own fists, when given downtime, Natasha is humanised by being at a loss.

Much like Winter Soldier, the plot here owes more to a Jason Bourne spy thriller than it does, say, Thor. The Black Widow training we saw in Age of Ultron is expanded upon, but given an extra twist in that the legion of young deadly Russian women are held under the thumb by chemically induced mind control. Our plot oomph comes from a gas compound that can break the hypnotic hold, and the various forces trying to gain control of it.

A side effect of grounding the movie’s feel and central character early on is that when more fantastical elements are introduced, though done sparingly for most of the run time, they stick out like a splinter. Mind control and a ‘cure gas’ are one thing but a ‘robot’ killer who can mimic superhero fighting styles, whilst a great excuse for Johansson to crack out her gymnastic punch-kickery, does rankle of forcefully injecting something, anything, superhero-like into proceedings. By comparison, the villainous Dreykov (Ray Winstone) is neither here nor there, disappointingly predictable in his cookie cutter nastiness.

For the most part though, Black Widow succeeds in the kind of things you’d want to see. Fights, action, pathos, and a little bubble of life for Johansson to exist within for her much deserved headline act. A late appearance for Rachel Weisz as the ‘mother’ figure adds extra flavour to our dysfunctional unit which is frankly much needed once the unbelievably escalating explosions erupt around them.

For a movie grounded in realism, the last whoomps of the finale are almost laughable in how tacked on it all seems. This doesn’t sour Black Widow, but will leave you wrinkling your face incongruously at the discordant mismatch between ‘character driven thriller’ and ‘big sky bang physics go bye bye’.

It’s also a shame that, with Pugh and Harbour expanding to fill up their scenes, the non-showy Natasha can feel like a third wheel in her own movie. Yet Johansson makes more work with a wry smile and pained look than a contorted kick, and Black Widow succeeds in giving both character and actor the belated respect they deserve. 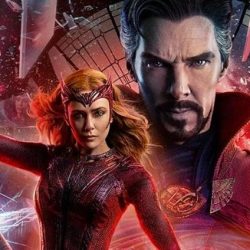 Doctor Strange in the Multiverse of Madness
June 30, 2022