Dear reader, I wish you could have seen my face during the most memorable sex scene I have witnessed on Netflix. Brand New Cherry Flavor had already made it absolutely clear that certain things were on the table, or oozing off of it.

I had accepted that the oral expulsion of slimy kittens was going to keep happening. The presence of zombies (in the Haitian folklore ‘dead serving a master’ sense) indicated that stomach-churning body stuff was likely.

But nothing could have prepared me for that sex scene, as my shocked, repulsed, and contorted expression would have given away.

Brand New Cherry Flavor isn’t going to out-gross the grossest, but it’s hard to think of a Netflix show in recent memory that has committed to the body horror approach with quite as much aplomb as this.

Set in the 90s (because as Fear Street has taught us, the people old enough to appreciate 80s nostalgia are too old for TV commissioner demographics), Brand New Cherry Flavor is a story that hits many standard Hollywood touchpoints about exploitative power dynamics and the sacrifice of innocence.

Yet the poisonous and capricious guts of this show seep through such familiar clothing, dripping with revenge, hypocrisy, and stomach-churning symbolism.

Lisa Nova is an aspiring filmmaker whose short movie, Lucy’s Eye, has caught the attention of producer Lou Burke. Intrigued by the raw talent and shocking ending scene (“How did she DO that?” choruses everyone who sees it), he signs her on to direct.

Yet Lou’s mentoring turns sour after Lisa spurns his advances and he replaces her as director. So far, so episode one, page one.

So Lisa turns to mysterious cat lady, Boro, and enters into a Faustian deal to place a curse on Lou in exchange for payment. Payment of what? Well, the white kittens that Lisa keeps painfully vomiting up in Boro’s presence are apparently better than American Express.

I wouldn’t be the first to talk about David Lynch and David Cronenberg as the biggest lumps of gristle in Brand New Cherry Flavor’s gumbo. However, in order to do so I would have to confess that, shockingly, I have never watched a film by either director (I know! I’m getting to it! I promise!).

Yet that synonymousness of Cronenberg with ‘body horror’ and Lynch with ‘dream like and surrealist’ means I can feel confident in asserting, “I knows it when I sees it”.

Shining out from all the purple and red colour palette is the always superb Rosa Salazar as Lisa. Salazar, as she proved in the quasi-animated Undone, is an actor for whom intense expressions radiate internal power.

Her being screwed over despite thinking herself smart enough to avoid it, and the burning desire for revenge that overrides her common sense, makes her more than an innocent fresh face that Hollywood stuffs into its overfull maw.

Not ready to be chewed up or spat out, Salazar’s performance is both the conduit and the anchor for Brand New Cherry Flavor’s more fanciful flights into the figurative and unexplained. This is especially true in the later episodes which suggest that Lisa’s ambition may have resulted in her playing her own part in screwing other people over.

Joining Salazar is a delightfully hair pulling turn from Eric Lange as Lou, and a seductively hypnotic Catherine Keener. Lange has a difficult job to do because on the face of it, Lou is the stockiest character from the book of ‘Hollywood Sleazebags’.

Yet as his life falls apart around him, Lange keeps Lou on the right side of ultimately pathetic; power deployed by an insecure man who crumbles when the tables are turned. Keener, as Boro, exudes such a powerful aura of mystery that you can’t help but be held in thrall.

Her calm workmanlike manner, whether she be making zombie minions or soaking up sex magic sweat with a sponge, is much more terrifying than any classic cackling witch approach would have been.

Brand New Cherry Flavor may wear its influences like flannel shirts shoplifted from The Gap, but comes soaked in all the blood and unnameable bodily secretions that a slick 8 episode Netflix show gets you.

It doesn’t tear or rend the flesh as much as those who push that envelope, nor is it as surreal as the masters of the craft, but in bringing you a combination of the two complete with a high calibre cast Brand New Cherry Flavor is a feast for the eyes. Just don’t question whose. 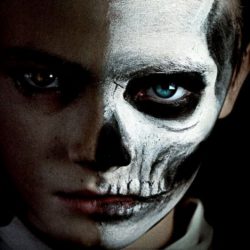