Brooklyn Nine-Nine is a fast-talking sit-com which blends smart wordplay with dumb gags, against a backdrop of the ever so slightly ridiculous. Starring an incredibly funny cast, all four seasons on Netflix are impeccably and consistently high on quality and well worth a watch if you want to have a great laugh.

Set in the fictional New York 99th police precinct, Brooklyn Nine-Nine is a fast-talking sit-com which blends smart wordplay with dumb gags, against a backdrop of the ever so slightly ridiculous.

I am pleased to say I was completely wrong. Throughout the 5 seasons currently on Netflix, the standard has been kept impeccably and consistently high. The cast is rounded out with the always hilarious Terry Crews. As well as Stephanie Beatriz as the scary and intense Rosa and Melissa Fumero as the uptight and super-organised Amy. Jo Lo Truglio stars as the super-needy Charles. And Andre Braugher as Captain Raymond Holt, a black and gay man who has risen up the ranks but also has an emotionless and robotic exterior.

The cast is balanced just perfectly so that each episode will have combative parts, heart-warming moments, and sparks flying in comedy genius. Samberg himself is the somewhat arrogant and childish Jake. But despite his immature behaviour Brooklyn Nine-Nine cleverly shows him as genuinely dedicated to his job and a skilled detective.

The will they / won’t they with Amy Santiago is played out over the course of several seasons but despite this Amy’s character isn’t defined by her relationship with Jake. In fact, one thing that Brooklyn Nine-Nine does very well is feature well written female characters who are strong (Rosa), neurotic (Amy), sneaky (Gina) and everything in-between.

The comedy style is very quickfire. The show peppers the snappy dialogue with physical humour and plenty of farce. I’ve yet to watch an episode that didn’t bowl me over and I can reel off at least 10 gags that had me breathless with belly laughs, which is a rarity for any comedy!

Each actor fills all their moments with plenty of flair, be it Terry Crews’ desperation to consume the calories needed to keep his muscled physique, Beatriz’s totally badassery, or Trugilo’s best friend obsession with Jake. The show is packed with enough running jokes and characterisation to keep longtime viewers chuckling, but you can drop into any episode cold and still be left smiling.

To sweeten the pill even further Brooklyn Nine-Nine’s depiction of serious social issues adds a laudable nuance. The total normalisation of Holt’s homosexuality at present-day gives licence to cover the challenges he faced as a young black gay detective rising up the ranks.

Similarly, when the show covers issues about racism (like when Terry is arrested simply for ‘acting suspiciously’ in a residential area – code for being black in the wrong place) this is done with all the pathos it deserves.

You’ll be humming the theme tune for days, and laughing for longer. With many sit-coms either going for extreme deadpan or thigh-slapping idiocy, it’s a total delight for Brooklyn Nine-Nine to return to the bedrock of sharp gags writing. Turn on the sirens, because it’s time to whoop. Nine Nine! 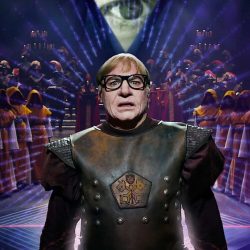