Bill Skarsgård plays notorious gangster Clark Olofsson in the Swedish crime drama series Clark. A controversial figure, Clark's crimes led to the phrase 'Stockholm Syndrome' but there's a lot more to the man than just that.

Netflix fans love a solid true crime documentary, but they love biopic crime dramas even more, which is probably why Clark is going to be such a hit for the streaming platform.

Directed by Jonas Åkerlund, this Swedish six-episode mini-series is based on the truth and lies of Clark Olofsson's autobiography with the title role of Clark being played by the always amazing Bill Skarsgård.

So what makes Clark Olofsson so famous that Netflix would make a story about him? Firstly he was a notorious gangster, starting his criminal career in the 1960s.

He was convicted of many, many crimes, including assault, theft, drug trafficking, attempted murder and multiple bank robberies, becoming one of the most controversial personalities in contemporary Swedish history. All of which led to him spending more than half his life behind bars.

But more than all of that, his infamous crimes gave rise to the phrase ‘Stockholm Syndrome'. Essentially Stockholm syndrome is a condition in which hostages develop a psychological bond with their captors during captivity.

Clark Olofsson is credited with the phrase because in 1973, while incarcerated at the Norrköping Prison, bank robber Jan-Erik Olsson took hostages at Kreditbanken in Stockholm.

Olsson demanded that Olofsson be allowed to come to the bank, which he was. He then spent the next six days with the hostages. Despite being convicted of the failed bank robbery in court, Olofsson claimed he had acted to protect the hostages.

The four hostages from the robbery defended their captors after being released and refused to testify against them in court, hence the term Stockholm Syndrome.

Is Clark Worth Watching?

There are few criminals as colourful as notorious gangster Clark Olofsson and his incredible story has to be seen to be believed.

Director Jonas Åkerlund has set out to create an engaging and entertaining series that will feature Clark's early years until the present day, played out over six episodes.

But in order to do that you have to have the perfect person to play the lead role and who can do that better than actor Bill Skarsgård?

From playing Roman Godfrey in Hemlock Grove to the iconic role of Pennywise in the IT franchise, the versatile and uber-talented Bill Skarsgard has the chops to tackle the life of Clark and make it look easy.

So yes, Clark is definitely worth watching. Just note that this is a Swedish language series so you will need to watch it with subtitles, or dubbed – subtitles are better.

Release Date For Clark On Netflix

In May 2020, Netflix announced Clark – a six episode crime drama series about Clark Olofsson had been commissioned.

Fast forward two years and it is finally coming to the biggest streaming service in the world.

Netflix has released a teaser trailer so we know we are in for a treat. They have also confirmed that Clark will premier on Netflix on 5th May 2022.

The Cast Of Clark On Netflix

There have been a few portrayals of Clark Olofsson in popular culture including documentaries and podcasts, but this looks like the first big-budget series based on Clark's life.

*Our rating is provisional and based on the cast, director, life of Clark Olofsson, the teaser trailer and all the information we have about the series. 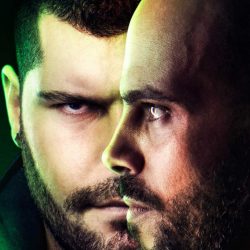