A quirky blend of Sci-Fi and Comedy, Colossal stars Anne Hathaway in this Godzilla inspired genre mash-up about a woman who's frustrations manifest themselves in the form of a gigantic destructive Kaiju monster in Seoul. It may sound crazy but it's actually a really good movie.

If you’ve ever been hungover enough to feel like you are a lumbering beast crushing all obstacles in your path then at least be assured that you haven’t got it as bad as Gloria. Her movements are replicated by the appearance of a huge monster in Seoul who causes untold destruction wherever it goes. Sound confusing? Luckily, it really isn’t. A combination of a fine performance from Anne Hathaway and confident direction from Ignacio “Nacho” Vigalondo means that this Godzilla inspired genre mash-up is always clear.

Down and out, Gloria is reduced to living in the bare bones of her old family home after being kicked out by her boyfriend for her excessive party lifestyle. She meets up with childhood friend Oscar and starts working at his bar, something which doesn’t help her train wreck drinking. But all her movements within a small children’s park during an exact time window each morning result in the mysterious materialisation of a gigantic Kaiju monster in Seoul which will move exactly in synch with her.

This is how the movie was marketed but in truth, the comedy element is intentionally disingenuous. Colossal is definitely a movie of two halves where the second half veers down a disguised but signposted dark path. Gloria isn’t the only one capable of inadvertently creating a huge destructive being, and her horror at the destruction she accidentally causes is not shared by her counterpart. To say more would be to spoil the wonderful bait and switch that Vigalondo sets up, then delivers with aplomb.

Colossal’s main strength is that despite it looking like an odd hodgepodge on the outside, the movie always knows what it is. Skyscraper smashing creatures are used as a metaphorical visual manifestation of a struggle for power. Broadly, this could be male oppression versus female struggle for liberation. Specifically though, it represents Gloria wrestling her own destiny from the men who would seek to chastise and control her. Her journey from party girl buffeted by laziness and judgemental guys into someone taking charge of her own destiny runs through the whole movie.

As I said, Hathaway is superb as a lead. She deceives you with her drunken staggering so that her sombre resignation when all appears lost is all the more upsetting, only to be buoyed by her determination to take back power. Jason Sudeikis as Oscar digs into how small town mentality can shape your world view and personal behaviour.

Sadly, Colossal does puff out of steam during the mid section. Side characters suddenly disappear with nothing more to do and a few scenes stomp around not advancing the plot much. The film hasn’t quite enough material to keep the ideas or themes constantly fresh. But despite 15 minutes of material that doesn’t significantly add to the movie, Colossal towers proud for managing to crash through a fun creature shell to reveal the steel girders of a character story. If you take action to own your own life then perhaps even the most powerless of people can rise up and dominate the skyline. 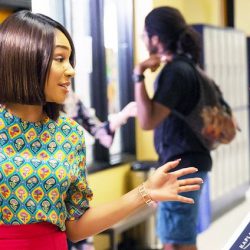 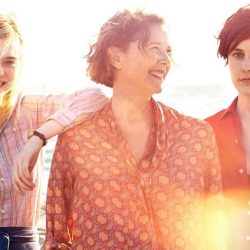