Based on the original Anime, Cowboy Bebop is the live action Netflix series that stars John Cho, Mustafa Shakir, and Daniella Pineda as all three fly through the solar system on the Bebop searching for criminals to seize so that they can claim a bounty worth living on. Very creative and well worth watching.

It seems Netflix is determined to bring classic anime series to the eyes of those who do not watch anime. Its live action adaptations clearly gain new eyes but have had the nasty side effect of invoking the ire of existing show’s fanbase due to being, so I read, ‘rubbish’ (see Death Note, surely an accidentally unfortunate title considering the backlash). This writer is an anime fan albeit one with large gaps, and one such gap is Cowboy Bebop, the beloved space jazz bounty hunter bonanza.

The above opening paragraph is my confession that, at the time of writing, I have not seen the original Cowboy Bebop. I went into the live action adaptation with no preconceived notions at all. If you have seen the original then you may have views about how the remake got wrong ‘x’ or tonally missed ‘y’, but like the pure undriven snow, this review is from an unsullied place with no footprints to follow.

Cowboy Bebop stars John Cho as Spike Spiegel, Mustafa Shakir as Jet Black, and Daniella Pineda as Faye Valentine. All three (although Faye comes in after a few episodes) fly through the solar system on the Bebop searching for criminals to seize so that they can hopefully claim a bounty worth living on, after job-based deductions (stop trashing the place, Spike!).

Except Spike is hiding from a gangster past wherein ‘The Syndicate’ think he is dead, ex-police officer Jet is determined to track down the dirty cop who framed him, and Faye’s post-stasis amnesia means she has no recollection of who she used to be.

Such character backgrounds flit in and out of the 10-episode run, where chasing a decent bounty so that our crew can at least eat and fix their ship is often the primary driver. Banter between Spike’s careless cool and Jet’s calm calculation make for excellent sparks, which are only complimented by Faye’s livewire and distrustful approach. Throw in a lost love for Spike and a long distance daughter for Jet and there is plenty to add ruminations to our cast in between the neo-noir episodic stylings.

What makes Cowboy Bebop stand out is the sheer style in which it is delivered. A baked-in jazz soundtrack (courtesy of original score composer Yoko Kanno) bleeds into every aspect of the show. The editing is awash with snappy cuts, close ups, and shots that heavily evoke pulp fiction comic book artwork.

When it comes to the look and feel of the show, Cowboy Bebop is like a smoky bar dancing with life right up until a stranger walks through those doors.

The cast are superb. Spike is a slinky, lackadaisical cigarette-chomper who knows full well his high-level martial arts skills will get him out of most scenarios. Yet Cho also give Spike a pained look behind the eyes that sells the moments of pathos perfectly.

Similarly, Shakir’s considered stoicism and love for this daughter (one episode revolves around him trying to get her the season’s must-have doll she wants for her birthday) is everyday humanity right there on the screen. Pineda goes so full-in that her initial introduction may rankle, but once she settles into being part of the crew then all the big eye rolling and heart on her sleeve facial expressions register true.

Is Cowboy Bebop Worth Watching?

Cowboy Bebop was great. Progenitor great. Like Firefly, or Dark Matter, Cowboy Bebop encapsulated an atmosphere of charismatic bounty hunters who never have luck on their side and chase a decent score that is always just out of reach.

Of course, the obvious point to make here is that Cowboy Bebop (the anime) predates them all, having originally been released in the late nineties. A large reason for my praise is the excellent cast and effortlessly cool presentation, but there are downsides.

Our show’s ‘bad guy’ is Vicious, played by Alex Hassell. An OTT scenery chewing character is not necessarily a bad thing, but Vicious gurns with such sword swinging blood lust that I was turned off caring about his backstory with Spike.

Similarly, their shared love interest Julia (Elena Satine) struggles to find agency beyond being buffeted between the motivations of two men. And yet even when she does find her own way, the shift in character is so sudden as to give script whiplash, souring the ending.

This hackneyed plotline is littered with obvious to tedious dialogue, and always becomes a clock watching exercise until we can get back to our main cast.

During its low moments, Cowboy Bebop is a show that tries so hard to stick so steadfastly to an anime style that it forgets that it is a different medium. What works in anime (OTT behaviour, overly drawn-out style, contorted camera angles) does not necessarily translate to live action, resulting in a show that can be overwhelming to the point of feeling like a self-parody.

Cowboy Bebop clearly comes from a place of love and is imbued with great actors, great music, and unique style that gives it a brain clogging quality.

I cannot shake that theme song and Bond-esque credit sequence from my mind! Sure, I will now turn to the anime as well, but I am also itching to re-watch this live action version again for the sheer fun of the ride. See you later, space cowboy. 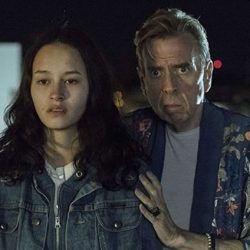