The aptly named 'Dark' is a mind bending, time-travelling thriller set in a small remote German town called Winden. When children start disappearing, similar to 33 years ago, the town goes into free fall, especially when some of them start to return...

It’s rather on the nose that this German sci-fi noir show is entitled ‘Dark’ because you are going to spend some time within it, both figuratively and narratively. There have been slew of miserable dramas that focused on the absolute parental horror of a child being kidnapped (something which The Missing did with aplomb) yet Dark builds over these foundations with sediments of time travel, mind twisting paradoxes, and family trees that will make you want to cower in that dark cave that features so prominently throughout the show.

The fictional town of Winden is a typical small-town territory. Dominated by the local nuclear power plant, most of the residents in town are inter-related and have been bedded in for generations. When children start disappearing in 2019 it harks back to a similar disappearance from 33 years ago in 1986, when Ulrich Neilsen (who is now grown up and a local cop) lost his own brother in the woods. This is quite a similar set-up to French thriller Black Spot.

In episode 1 Ulrich’s own son, Mikkel, goes missing in the same woods leaving Ulrich to tear the town apart looking for him. In the same episode Michael Kahnwald commits suicide, leaving an envelope that instructs that it must not be opened until months later at a specific date and a specific time.

On the face of it, this is a normal dramatic set up. The town of Winden is pure noir territory. People harbour secrets that come bubbling up to the surface as the show slowly reveals itself. Symbolically surrounded by a large forest, Winden’s people are totally cut off.

There is never a feel for anywhere else; our characters exist in a microcosm of secluded intrigue. Rain pounds down with violent constancy and the score parps forebodingly at the slightest provocation. Underneath dense foliage and tunnelling beneath 99 years of Winden’s history, the gaping caves descend into mysterious darkness.

Something is very wrong with Winden. Bodies of dead children reappear, dressed in clothes that are decades out of time: their eyes burned out and ear canals burst. With this time travel mechanic, it feels like an already complex murder mystery plot enters the realms of 3D chess when certain characters pop in and out of time frames where they shouldn’t be.

Whilst each series creators and showrunners Baran bo Odar and Jantje Friese expertly keep a steady hand on the wheel so that scenes do make sense in context, it still causes some migraines trying to remember the convoluted family trees involved. Four main families (parents, children, grandparents) have a variety of ties to the plot, and when the action skips between 2019, 1986 (and later 1953) you need to not only keep track of who is who, but also who the new actors playing younger versions of themselves are! More than once I had to pause the show – rubbing my temples – in order to get my head around what the characters’ relationships to each were.

Despite some headaches, Dark is expertly crafted. The show has enough relationship drama with both the adults and the teens to ensure that nothing gets too bogged down in time paradox problems, but similarly, time is given to discussing the nature of destiny. If an object is brought from the future to the past only to cycle round again, where did it even originate from? The aspirations of philosophy add a nice intellectual element.

That said, it is a shame that Dark lacks confidence in these scenes as it has a habit of oppressively blaring loud musical discord over the most innocuous of conversations, just to make sure you are still paying attention. Even so, things move along at a ‘just one more episode’ pace and, come the conclusion of season 1, there is enough left unexplained (with new mysteries dropped in) that you’ll want to jump straight into season 2, as I now have! 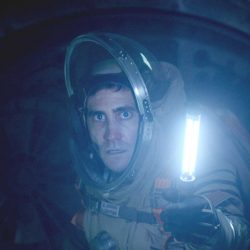