The comedy horror, Day Shift, follows Bud whose mundane pool cleaning job is a front for his real source of income: hunting and killing vampires. Until a recent kill makes him the target of a dangerous bloodsucker.

Supernatural hunting organisations are clearly the current zeitgeist. With news crawling out from under the table that the not particularly well received Ryan Reynolds / Jeff Bridges ‘Deados’ arresting movie R.I.P.D. is getting a sequel that no-one asked for, here comes Netflix with a big picture of Jamie Foxx and the promise of vampire splattery, in Day Shift.

Day Shift picks up its own sheet of genre paper and frantically ticks as many demographically pleasing boxes as possible before anyone can reach over to snatch it away.

‘Horror comedy’ is the thickest tick but thrown into the mix is also ‘ buddy cop’, ‘martial arts’ and ‘gang busting drama’. A great genre mashup can produce unique mutated gems but there is the spectre of algorithm pleasing in this directorial debut from J. J. Perry.

What Is Day Shift About?

In order to combat an ever present vampiric threat, the ‘Union’ exists in the shadows. Union members hunt the undead bloodsuckers and make profit from removing their teeth.

But the Union has rules of conduct and disgraced ex-member Bud Jablonski (Jamie Foxx, Project Power) is barely scraping by on the outside.

Excluded for his questionable methods, Bud must suck up to the Union in order to make enough money to prevent his estranged family from selling up and moving on. Shame then that a local vampire elder has other plans.

The space limiting confines of an old woman’s house are smashed to pieces during Bud’s stylish battle with a vampire whose boneless contortions echo the Evil Dead dialled up to 11.

This high energy skirmish is a glory of fight choreography where you frequently think Bud has the upper hand, only for his foe to bend at an inhuman angle and claw itself back into the fight.

Is Day Shift Worth Watching?

Throughout the movie, it is the action scenes that land most effectively. It certainly isn’t the plot, which quickly loses interest in the ‘how’ or ‘why’ we are doing anything.

Something about suncream so vampires can go out in the day, real estate gouging, and a sprinkle of parental guilt amongst bare bones ‘we want to be seen as gods!’ vampiric metaphorical moustache twirling.

Gizmo swinging vampire hunters blasting a cache of undulating undead through an open house is excellent stuff, but like fireworks in the night sky once the fizz fades away all you have left is the afterimage in your retinas.

Foxx swaggers around the place as is his default position in any of his movies; such attitude feeds into the buddy cop genre.

Lumbered with ceaseless supervision by rules stickler Seth (Dave Franco, The Afterparty) as a condition for re-joining the Union, Bud and Seth bicker about the right way to do things.

Yet for a comedy duo to work there needs to be some equal footing on which to build give and take.

Bud’s overbearing presence consumes Seth’s weedy weakness to the point that they never really spark; a running joke about Seth soiling his trousers in the face of danger serves as an on the nose indicator of the level the comedy is pitched at.

With a virtually invisible baddie (Karla Souza unable to find anything to sink her teeth into) and a vampire mythos that is utterly disinterested in consistency or logic, what is left is a collection of clown horn honking comedy moments dragging us along to a handful of fun high energy action sequences.

Day Shift is your typical ‘sure let’s watch this then’ Netflix movie that only sucks in your attention because it’s right there on the front page this evening.

It lacks any self-reflection but is still good for the occasional blood pumping spurt. 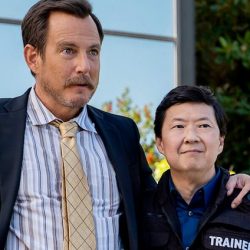 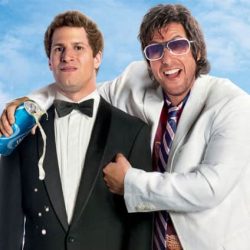