A fictionalised drama but based on real-life events, Deep Water is about a series of true murders and attacks on gay men predominantly around Bondi Beach as detectives tie modern-day murders to a series of unsolved killings in the 1980s.

Deep Water is an Australian drama series loosely based on a series of true murders and attacks on gay men predominantly in the 1980s.

However, in doing so they uncover a historic police ambivalence to potential murders from 30 years past including a misruling of suicide by drowning of Stone’s character’s brother.

Netflix have more and more swerved to presenting ‘limited series’ of late. The binge-watching model has been very successful but when faced with getting into a series with multiple seasons stretching out some people balk at the time commitment.

The Limited Series subheading can be a reassuring presence. What you are about to watch is it. No sprawling narrative. No intertwining plot lines. Just a singular story from start to finish.

Despite this ability to focus entirely on the four episodes allocated, Deep Water is a very shallow experience.

The core serial killer plotline and specific characters are fictitious and are never particularly compelling. Every single person’s sensibilities and forward projecting actions are immediately identifiable from the first few moments of being introduced.

There are no red herrings or sub-plots. No unexpected character choices. No directorial or presentation flairs to visually pull you in. Shows like Poldark make the most of their iconic scenery. For a show set in the famous Bondi Beach, there is an odd lack of gloss here.

Even the hints of police conspiracy are summarily dropped to be replaced with a shrug, perhaps in an effort to avoid stoking the ire of a real police force who were guilty of paying little mind to the fates of homosexuals on their watch.

In Australia, Deep Water the drama accompanies a separate documentary about the actual murder victims and targets of violence. With that in mind, this series smacks more like a sales pitch primer for the real-life story rather than a fully realised drama in its own right.

This isn’t helped by a one-note performance from Stone who fails to give emotional weight to investigating the suspected murder of her brother 30 years prior.

That, and her clichéd decisions of secrecy or threats that would likely prejudice the investigation, are ripped straight from daytime TV scripting. Of the cast only Noah Taylor’s quiet shame and Jeremy Lindsay Taylor’s embodiment of a gay man carrying the pain of a more violent time really land.

Deep Water just bobs along and is 100% predictable which deflates any attempt at gripping drama. Due to its short length, it is perfectly easy to be carried along in its currents, but nothing about the show really surfaces for air.

Instead you can check out Wanted which is a better Australian crime drama. 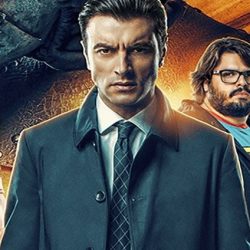