Feeling like an outcast, Willowdean Dickson decides to rile her pageant loving mother by entering the Miss Teen Bluebonnet contest. Along with her friends, their attempted protest actually proves to be more rewarding than they imagined. A sweet, if somewhat unoriginal movie, with the added bonus of a Dolly Parton soundtrack.

Set in Clover City, Texas, Dumplin' is girl called Willowdean Dickson. An overweight teenager who is also daughter to the pageant obsessed Rosie, played by Jennifer Aniston (The Morning Show). Having been borderline neglected by her mother, Willowdean was raised by her aunt Lucy. The two shared a common love of all things Dolly Parton. And frankly, who can blame them!

With Lucy now gone, Willowdean must find some way to cope with pageant season and in particular, the Miss Teen Bluebonnet contest. In an attempt to rile her mother, she decides to enter the competition. It's a protest. In a bid to highlight how ridiculous the contest is, Willowdean ropes in her equally unconventional friends to take part.

The problem is that she totally underestimates just how much work goes into the show. Between that, school and her part time job as a waitress, there's a lot going on in her life. Deciding that she would rather not look like a failure on stage, Willowdean decides to seek some help. That comes in the form of three drag queens who take her, and her friends, under their wing. With some hard work and guidance Willowdean, Ellen, Hannah and Millie are moulded and shaped and put through their paces. Finally, they are pageant ready.

Dumplin' is a genuinely inoffensive movie. Danielle MacDonald, who plays Willowdean, is entirely relatable. As a character, she is likable and funny. Quick-witted and with enough nouse to avoid the trap of looking like just another sad teenage girl. It's a little contrived but hey, it's a dramedy about beauty pageants in Texas! So in that sense it does exactly what it says on the tin.

With a belting Dolly Parton soundtrack, a healthy dose of hairspray and enough tiara's and glitter to drown in, it is a fun, if unoriginal movie. The characters have some depth and the overall storyline is perfectly plausible. I particularly liked seeing Harold Perrineau and Kathy Najimy and the positivity that emanates from the film. So if you want to watch a sweet, fun movie that'll both give you a laugh and bring a tear to the eye, check out Dumplin'. 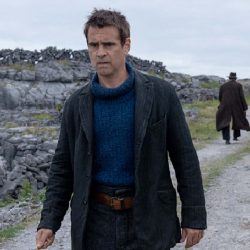 The Banshees of Inisherin
January 6, 2023