25-year-old Emily has been given her dream job in Paris to bring an American perspective to a small branding agency. But when her boss doesn't like her, her boyfriend doesn't want to visit and no friends, how good is life for Emily In Paris?

From creator Darren Star (Sex In The City) comes the Netflix hit show, Emily In Paris.

Starring Lily Collins, this is the tale of one young woman's journey through the ups and downs of life in a new city and we love it!

What Is Emily In Paris About?

Emily Cooper is 25 years old and lives in Chicago where she works as a marketing exec.

Complete with a boyfriend and a great boss, Emily's life is on track.

Then her company acquires a much smaller company in Paris, and when her boss can't go, Emily (Lily Collins, Inheritance) is sent instead. For a year. Without being able to speak a word of French!

New to her surroundings and in love with the city, Emily starts a new Instagram account – EmilyInParis, hence the name of the show.

As the cute pics rack up so too do the followers, which is just as well as Emily is there to manage the social media side of the luxury brands the agency has on its portfolio.

Her big problem, apart from not being able to speak French, is that her new boss Sylvie, and her co-workers, really don't like her.

But with her positive attitude and clever ideas, Emily keeps going, making friends and attracting admirers as she goes.

So how will Emily fare in Paris? You'll just have to watch to find out.

Is Emily In Paris Worth Watching?

There's a lot to like about the show once you get past a couple of clangers at the beginning.

Without being too picky, it's rare that a young exec gets sent to the French capital, Paris for a year to ‘give an American perspective' in any job.

Get past that, and the French don't come off too well either. Pitched as rude, unfriendly, and downright sleazy, they're initially the bad guys to Emily's upbeat personality.

It's a really unfair caricature, but it does provide a jumping-off point for them to eventually come to love Emily.

Otherwise, this is a cute, heartwarming show that Lily Collins excels in.

She is adorable and so so likeable that you just can't help but root for her. And she comes with a fair amount of formidability and sass, so she's not a complete walkover.

The supporting cast all brings something fun to the show, and overall Emily In Paris is a very binge-able easy-watch show even if it's devoid of any real drama.

How Many Seasons Of Emily In Paris?

Currently, there are two seasons of the show. Emily in Paris seasons one and two were a huge hit for Netflix.

The series reached the top 10 list of most watched streaming shows, and in May 2021, Netflix revealed that the series has been watched by 58 million households in the month after its debut.

Fans of Emily in Paris will be delighted to know that a third season is coming soon. Click here for all the details…

Netflix announced that it had renewed the show for both a third and fourth season at the same time hurrah.

If you can't wait until then, check out our list of shows like Emily in Paris to keep you entertained!

Lily Collins as Emily Cooper, who moves from Chicago to Paris for a social media strategy job at Savoir.

Ashley Park as Mindy Chen, a former nanny and aspiring singer who is Emily's best friend in Paris. 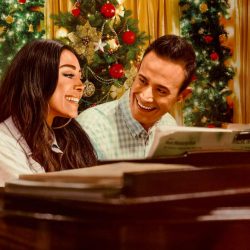