A dark comedy that follows the ups and downs of cafe owner Fleabag. She is a flawed, messy, guilt-ridden character that exudes false bravado in the face of all that is going very wrong in her life. Stellar writing and sharp wit make this an award-winning show that is definitely worth watching.

Fleabag is a British dark comedy written by, and starring, Phoebe Waller-Bridge. An unusual character, Fleabag is leading an incredibly messed-up life. She puts on a brave face and through her antics and dry-wit goes through life as though everything were perfectly fine. Except that it's not.

Where to start with Fleabag's life. She opened a cafe with her best friend who tragically died and now the cafe is sinking under a mound of bills. Her mother died three years ago and her Godmother, played by Oscar-winning actress Olivia Colman, has since hooked up with her dad. They really don't like each other.

Her sister Claire (Sian Clifford) is a stifled uptight overachiever with a sleazy borderline alcoholic husband. And through it all Fleabag is happy to have sex with just about any random man that crosses her path. No doubt in a bid to fill the empty void and guilt in her life. So clearly things could be going better for this Londoner!

However, Fleabag is not all doom and gloom. The striking difference between this show and others is the breaking of the fourth wall. This is essentially where Fleabag talks directly to the camera providing an additional narrative to the story. And this is where the dark comedy really excels. It is a sharp and witty commentary that elevates the characters and provides a few laughs.

Initially, I really wasn't sure what I was watching. I basically didn't get it. But I love Phoebe Waller-Bridge, an incredibly talented writer and actress, so I stuck with it. And I am so glad that I did. Because it is so good. As the episodes whizz by (there are only 6 of them), the story unfolds and all of the pieces fall into place producing one complete story that really is quite realistic but heart-breaking.

Season 1 is available on Amazon Prime but Season 2 is not included with prime membership. However, if you have BBC iPlayer, you can catch up on the boxset for free on that. By the way, Season 2 is even funnier and more uplifting and stars the awesome Andrew Scott (Black Mirror Smithereens) as a delectable priest and potential love interest. It's all very steamy! 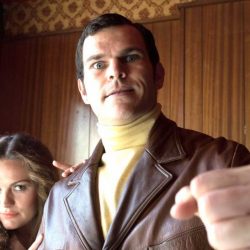