This powerful and brutal survival drama takes the audience into a white knuckle ride in very unexpected and confronting ways. Not just the fight for the survival of an inevitable plane crash, but the crushing struggles for survival of the inner tortured soul of a man who is in the vice-like grip of dependency.

Flight tells the story of Captain Whip Whitaker, a commercial airline pilot who has years of experience under his belt. Piloting the SouthJet Flight 227, Whip takes off for Atlanta before the plane flies through extremely rough weather and experiences violent turbulence. All seems fine once they are above the clouds. Then something goes horribly wrong with the plane and it goes into a near-vertical nose dive.

Whip and his co-pilot can't level out the plane and everything looks over. But Whip pulls off a miracle by turning the plane over, flying upside down, and manages to level back out. With seconds to spare, the plane clips a church and crash lands in a field virtually saving everyone on board. Captain Whip Whitaker, is immediately hailed as a hero, but all is not as it seems.

This is a man who suffers extreme levels of addiction, an alcoholic who likes to mix this with a heady cocktail of drugs. So when Captain Whip Whitakers' blood test shows how high he was when he made the miracle maneuver, his heroes status falls apart very quickly, leaving Whip to face up to the hardest truths of his life.

The first thing that hits you about this film, is the opening scene. Immediately the viewer is exposed to the excess that is Captain Whip Whitaker. In an almost unnerving and disturbing way, we observe his night of sex, alcohol, and drug use prior to heading off to pilot SouthJet Flight 227. Now, I raise this point because this scene actually sets the trend for the journey ahead. This is more a journey of brutal personal struggles and redemption than just a plane disaster movie.

For me, this introduction does exactly what it sets out to achieve. Clearly director Robert Zemeckis wanted to make things brutally clear where Captain Whip Whitaker was in his life. Some critics have suggested this scene is unnecessary but I would say that it makes a powerful statement and is a masterstroke.

Now, I must admit that I am a huge fan of films by Robert Zemeckis. I mean, how could you not like Back to the Future, Forrest Gump and Castaway? But, with Flight, he takes the audience on a much darker path. The build-up to the crash is full of tension and captures the panic of the passengers in a terrifying way. There is a bold focus on the extreme addiction of the main character. Zemeckis confronts these brutal truths head-on and does it in a beautifully balanced way. Add to this, Alan Silvestris' amazing score and Flight is a movie masterclass from Zemeckis.

It's fair to say, that Zemeckis gets this distinctly adult story across with impressive passion. But it is the exceptional performances from the cast that really hits home. Denzel Washington (The Equalizer) is incredible, playing Captain Whip Whitaker. He gives a hard but sympathetic performance which is both torturous and yet very touching. Don Cheadle, Bruce Greenwood, and Melissa Leo all give strong performances as officials who investigate the crash.

John Goodman is brilliant as Whips turn to, substance supplier, and steals every scene he appears in. But the real standout comes from Kelly Reilly, who plays Nicole, a heroin addict who makes a personal connection with Whip. Reilly gives a crushingly real delivery of her character which compliments with Washingtons' simmering portrayal of Whip perfectly.

To conclude, Flight is a rare film in today's world dominated by superhero films. This is a brave look at the dark side of the human soul, that manages to keep the viewers' sympathy throughout. Just an extraordinary film, that has a huge impact. For me, Flight is a flawless piece of cinema and is strongly recommended. 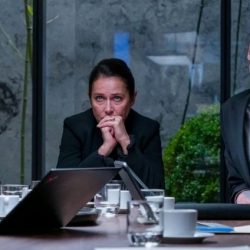