What happens with a role-playing murder mystery Game Night gets hijacked by a real crime but the players don't know it? Starring Jason Bateman, Rachel McAdams and Kyle Chandler, the movie is a really good laugh and well worth watching.

Gotten past the age of being willing (or able) to hit the clubs, pubs, or street food grubs of an evening? Then in all likelihood, you will end up meeting with friends at home for drinks and Game Night!

Pictionary? Articulate? Charades? Poker? Monopoly? In Game Night, starring Jason Bateman and Rachel McAdams as a couple trying, but failing, to conceive, game night is a competitive release valve for the pressure of adult life. That is, until the stakes get too high.

What Is Game Night About?

Game Night mines for dark comedy within a simple but effective premise. What if a murder mystery role-playing evening got hijacked by real crimes, but the players think it's all part of the game?

That's the predicament facing Max and Annie Davis (Bateman and McAdams). Racked with jealousy over his more successful brother, Brooks (Kyle Chandler), and with Brooks promising his glamourous Stingray car as a prize, Max agrees to play a live-action game complete with actors.

The group are up for a fun evening, but things get kicked up a notch when several masked men burst in and apparently kidnap Brooks.

What follows is a gloriously funny series of misunderstandings where our competing players launch themselves into the investigation ignorant of their danger-filled surroundings.

Considering the plot does a great job of playing with your expectations of what is going on I will refrain from spoilers, except to say that a wonderful comically timed moment with a gunshot certainly spins round what our cast expects from the night.

Is Game Night Worth Watching?

Even with a solid premise such as this and a fun-weaving narrative, the effect would be lost without great characters and solid performances. Bateman imports a healthy dose of his Arrested Development persona as a man trying to do right but often foiled by flaws he fails to recognise he has.

His chemistry with McAdams makes for excellently sparky dialogue as they bicker both in frustration and in mutual appreciation throughout in a way that long term couples will almost certainly recognise.

Kevin and Michelle are driven by one joke throughout (an indiscretion that goes from ‘allowed' to ‘but not like that') but it's a good running gag that gets a great payoff if you stick past the credits.

The fun in Ryan and Sarah's relationship radiates due to an inverse power balance where Ryan (who usually dates airheads) has no idea how to deal with an actually intelligent woman.

As the chaotic night unfurls into ever-worsening events there are star turns from the wider cast. Special mention must go to Gary (Jesse Plemons) as Max and Annie's neighbour who longs to be part of the group. His utter fun sucking personality leaves them ducking him throughout until they need his help.

This leads to a wonderfully tense scene involving creeping around his house and the spilling of lots of accidental blood, but Plemons' monotone performance will recall any acquaintance you've ever made where you would drop behind a wall to avoid them at all costs.

The board that these sparkling game pieces move across is one of the most exciting camera work from directors John Francis Daley and Jonathan Goldstein.

All good comedy should treat the fourth wall as a character in itself and many scenes are heightened by deft timing and techniques.

One long sequence involving what can only be described as a frantic game of ‘keep away' is made all the more hilarious for being a long unbroken shot which must have had the camera movement and actors all choreographed to within a millimetre of their lives!

Game Night is refreshing in an American comedy market dominated by tent pole releases painting with such huge broad strokes that any appeal is watered down to the basest level.

It's quick-witted without being intellectually exclusionary. It's snappy without being *finger* snappy. Game Night invites you to gather round and enjoy some gloriously heightened competitiveness with characters that could be your friends.

Pour a drink, roll the dice, and get ready to flip the board when someone slaps a hotel on Mayfair.

Michael C. Hall as The Bulgarian 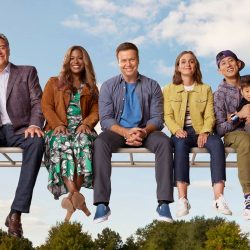