A global catastrophe is on the horizon with an impending Geostorm. But wait! Gerard Butler is on hand to shoot off into space to the ISS to fix the problem in this jam-packed action movie. For a big-budget disaster epic, it still retains a sense of fun which makes it a decent watch.

There’s a storm brewing. A…geostorm. What’s a Geostorm? Well, it’s a storm so massive that it goes…geo. The lightning will never end. The seas will boil. Hot places will turn to ice. You get the idea. It is this kind of global catastrophe that the much-maligned Geostorm promises. Although, like any weather forecast you see in the morning, it’s worth giving such promises the benefit of the doubt.

Full disclosure: I don’t like disaster movies. Movies like The Day After Tomorrow, 2012, San Andreas, etc… leave me cold. Such CGI devastation holds little interest and the characters running around making “bwa?” faces doesn’t engage me, nor does big family tragedy entice me in. Geostorm has elements of this, sure, but writer/director Dean Devlin treats his debut feature film as a chance to pull out any idea he may have had at any point and throw them all at the wall not only to see what sticks, but to throw things hard enough that even things that wouldn’t stick impale the wall with sheer determination.

The basic set up is that in an undefined future where climate change is wreaking havoc across the globe, a complex series of satellites designed by Jake Lawson (Gerard Butler) are deployed to artificially control Earth’s weather. Controlled from the International Space Station (ISS) the system – dubbed ‘Dutch Boy’ – is under the stewardship of the USA before a handover to international supervision.

Except of course Gerard Butler (RocknRolla) is a man who doesn’t wait for stuffed shirts to tell him what to do! He’s not going to follow the book. He’s glared at the book with disdain. And then he’s taken off the project for not respecting the book. Oh, and the book is now owned by his brother, Max (Jim Sturgess). Awkward.

That paragraph doesn’t do justice to the amount of ‘plot’ going on in Geostorm. There’s a political conspiracy going on. Max is having a relationship with Secret Service agent Sarah Wilson (Abbie Cornish) which we are told is Definitely Not Allowed. There’s a father/daughter estrangement set up and coda bookending everything. There is sabotage in space. Sibling rivalry. Assassinations. Heat death lasers. The list goes on! Geostorm has such a melting pot of ingredients that it almost doesn’t matter than none of them individually taste any good: you don’t have time to notice.

Events are sparked off by mysterious weather patterns which indicate that not all is right with Dutch Boy. Jake is stuffed in a rocket and shot back up to the ISS to figure out what is going wrong. Perhaps surprisingly for a movie about global weather disaster, there aren’t that many weather effects taking place. This is mostly down to production and budget issues (substantial reshoots with a different director took place) but the end result is that freezing deserts or targeted heat attacks are used sparingly. These moments are disappointing in that they don’t deliver the large-scale threat we are promised early on, but in a practical sense, the deployment of weather threats to hurry along the action is well used.

Performances from the cast are an amorphous thing. Abbie Cornish has little to work with beyond love interest but her hard-line dedication to her job means she carries the weight of making Jim Sturgess interesting. Sturgess also has a jobsworth role in that he functions to link up the Earth plotlines with the Space plot lines through a series of huge video screen calls with Butler.

Their sibling rivalry never gets past the testosterone testiness surface level of scripting but Butler’s sheer bullishness is fun by virtue of being so unnecessarily macho that Russell Crowe might complain of the theft of his shtick. But you also get some Ed Harris and Andy Garcia for your money who churn out solid, if unshowy, performances.

Among this mangled mess, Geostorm still somehow emerges like a ray of sunshine because, unlike other big-budget disaster epics, it retains a sense of fun. It is ridiculous and can’t pick a lane, sure, but despite – no – because it jumps all over the place it keeps things interesting throughout. It doesn’t matter than it makes no sense (a lot of scenes can be countered with the questions “but, why?”), the movie asks nothing from you beyond joining it for the ride.

It’s not often that Gerard Butler can swagger into a room full of suits and (not) apologise by saying he ‘literally’ just flew in from space. Some more destruction to warrant the whole plot would have been nice, but Geostorm turns potential global disaster into a gaggle of smile-inducing daftness. As we enter month 7 of stress over a real and frighting global threat I, for one, am grateful for some smile-inducing escapism. 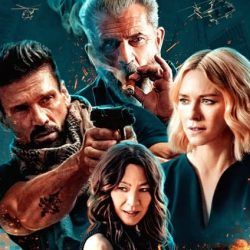