Two kids are recruited to battle video game monsters that have found their way into the real world in Glitch Techs, a really fun and brilliantly animated series that's perfect for kids and their nostalgic parents!

When there is something strange in your neighbourhood, who comes even though you didn’t call? Glitch Techs, that’s who. Glitch Techs is a Nickelodeon-produced show distributed by Netflix which packs a banging theme song and all the video game nostalgia you can eat.

Teens Hector “(High) Five” Nieves and Miko “Me-K.O.” Kubota are like Men In Black operatives except instead of aliens they wipe your memory when glitches in video games cause the in-game creature to not only manifest in the real world but wreak havoc in accordance with the internal logic of the games they have escaped from. By using a specialist gauntlet, the pair can utilise power-ups such as super-speed or extra high jumps in order to use their gaming skills and take down the escapee glitches.

Glitch Techs has gotten the tone and angle perfect to be a draw to kids and adults alike. The game styles covered are mostly on the late 80s/early 90s side of nostalgia and so the series eschews violent gaming for a more inclusive selection such as classic arcade hits or home console staples. One episode may feature a massively destructive pixel very much reminiscent of Pong (sorry, Ping, in the show) whereas another will have a humorously flamboyant vampire that of course is definitely not a thinly veiled reference to Castlevania at all, nope.

Animation-wise Glitch Techs feels like latter-era Cartoon Network shows, with O.K K.O a pleasing reference. There is plenty of love given to ensure battling the glitches is full of eye-catching energy and excitement, but also bringing to life the worlds of each game in a way that will make any gamer of a certain age twinkle. Much like Hi-Score Girl, gaming as something that brings friends and family together is explored, although thankfully Glitch Techs does so in a shared group fun way rather than Hi-Score Girl’s young obsessed boy route.

Over the course of two (not particularly long) seasons, there is a good mixture of stand-alone episodes and recurring narratives. Miko’s high-energy enthusiasm is balanced by Five’s slightly awkward sincerity. Both are cowed by egotistical senior MitchFTW who is every superior-feeling person you’ve ever met. Above him the team is run by exasperated Phil who’d rather have doughnuts than deal with constant chaos although he works to keep his team grounded. As the plot progresses both we and Phil learn more about his apparently secretive past.

Stumbling across Glitch Techs on Netflix feels like plugging a cable into my brain and beaming a wish of what I want a show about gaming to be into the ether. Sure the humour is on the childish slapstick side – this is a kids show after all – but to have a modern animation go all out on trying to represent the warm glow that gaming gave (and gives) a generation is a joy.

Watching it feels like being 10 years old again, controller in hand, enraptured by graphics and the challenge ahead. And for the show to do this without being haughty or sneering but instead work to generate positive bonding messages is an achievement. 90s shows like Reboot may have taken us into the games, but Glitch Techs utilises a fun and varied cast to bring to life the thrill to the gamer, wonderfully portrayed as dramatic ‘real world’ puzzles to be solved. Plug in, power up, and game on. 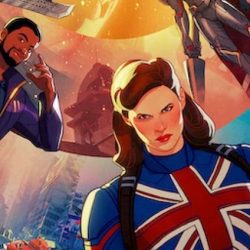