An award winning Western style limited series, Frank Griffin is the leader of a murderous posse who promises to burn to the ground any town that harbours former cohort Roy Goode. With Goode hiding out in La Belle, can Griffin get to him and can the town of La Belle survive. Superb.

From writer A. Scott Frank (‘Logan’, ‘Out Of Sight’) comes Godless. A western drama that swirls with all the gorgeous visuals of a carefully crafted period piece. Starring Jeff Daniels as Frank Griffin, the leader of a murderous posse, the series opens with the harrowing aftermath of their destruction of the town of Creede. Children hanged, bodies burnt. A train derailed. And the promise to do the same to any town that harbours former cohort and son-like figure to Frank, Roy Goode.

We learn as the series progresses that Roy Goode (Jack O’Connell from '71) was abandoned by his brother as a child. He was then taken in by Frank who raised him as kin. But the series opens with the murderous results of betraying Frank. Roy has stolen their latest haul and fled, gunning down several of his past accomplices in the process. Barely escaping, he winds up at the ranch of hardened woman, Alice, who shoots him in the neck for good measure.

Whilst Roy’s journey (and Frank’s searching for him) forms the core narrative of Godless, there are several other plots that revolve around the town of La Belle. La Belle is a mining community that was devastated when virtually all the men were killed in a mine explosion. Some plotlines link nicely with the central story. Others are just there to flesh out the wider characters, with mostly good results.

Mary Agnes (Merritt Wever) is the brash widow of La Belle’s Mayor. And she adds plenty of grit throughout. But also displays a tender side in caring for the childish but warm hearted deputy, Whitey. Whitey (Thomas Brodie-Sangster) isn’t afraid of anyone. However, his visits to the tiny village of Blackdom due to his romantic interest in a pretty young black girl causes racial tensions. Life in the old west this may be, but there is still time for everyday drama.

It’s immediately obvious that great effort has been expanded on the cinematography for Godless. The ever-present western dustbowl churns in hoof-pounded clouds. The effort of the people to keep their tenuous grip on life is portrayed well. Wide, sweeping shots emphasise how La Belle is surrounded by the dusty plains in all directions, helpless to the whims of whatever blows into town.

The quality of acting is superbly high and the show looks gorgeous. But even with the show’s limited run of seven long episodes, there doesn’t seem to have been enough room to do all the elements justice. Some parts of the story are just plain left unfinished or unexplained. We spend a lot of time seeing Roy and his backstory with Frank, but what actually causes him to turn his back on his father figure? It’s never really said.

But what Godless does show is still fantastic. Regardless of a variety of plot irritants, Jeff Daniels pretty much steals the show. From when we first meet him as he gets his arm amputated through to every loaded conversation, his screen presence is utterly enthralling. He speaks with such certainty that you can see why a gang of 30 men would follow him. His weather-beaten features may be hidden behind a large grey beard, but there is fury and pain in his eyes at Roy’s betrayal.

Similarly, Roy’s quiet humbleness is genuinely engaging. And lastly, praise must also go to Michelle Dockery as Alice. Her strength and grace are immediately apparent but as the show goes on she slowly lets down her defences. There is a huge range of suppressed emotions going on under the face, which Dockery performs with admirable skill.

Godless has garnered huge critical praise and it is easy to see why. The finale is an explosively entertaining shootout with horses and bullets pounding everything in sight. It is filled with wall to wall superb acting. And the sprawling panning shots of the vast American wilderness is awe inspiring.

It is undoubtedly one of the better shows that Netflix has ever created. 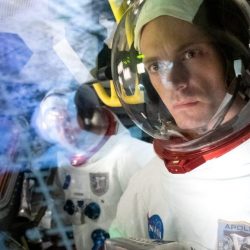