A true tale of two extremely different people walking in each other's shoes and developing an unexpected friendship. Just film making at it's very best, the film won Best Motion Picture of the Year 2019 at the Oscars. An inspiring and hope-filled story, enhanced by stellar performances from the two lead actors, resulting in a must-watch movie that everyone should see.

Green Book tells the true story of a world-class black musician who embarks on a tour of Deep South America in the early 1960s. A classically trained pianist who had studied at the Leningrad Conservatory of Music. He has played with the London Philarmonic and made appearances at the White House. The well educated Dr. Don Shirley hires an Italian hard man called Tony Lip as his driver for the tour. However, given the tensions towards blacks in the South, Tony's job becomes much more than just the driver.

It's fair to say, that in 1962 America, racism was rife in the deep south. In fact, the name of the film is taken from an actual publication called “The Negro Motorist Green-Book“. Used to help black Americans avoid discrimination and segregation. Things were so bad, that this book was essential just to be safe when traveling as a black person.

Clearly, a cultured upper-class black pianist taking a music tour in such a hostile part of the world would be a challenge. But peoples attitudes never change unless those beliefs are disproved and Dr. Shirley could present himself as an unquestionable genius. Even, his driver come minder, Tony Lip is inherently racist. But this is where the focus unfolds to display how people can connect, regardless of their race or background.

The big surprise for me was seeing that this film was produced, written and produced by Peter Farrelly. Farrelly is famous for a long list of outrageous comedies like Dumb and Dumber, There's Something About Mary and Shallow Hal. So, such a sensitive story and biographical is not normally what you would get. However, Peter Farrelly applies his genius to the Green Book creating a truly magical experience. As you would expect, the long list of comedies never provided critical acclaim for Farrelly. But, he sure makes up for it with Green Book.

Now, I could spend hours singing Farrelly's praises. But let's be fair, it is also down to the amazing performances from the cast. It's fair to say that everyone in the green book gives great performances. Linda Cardellini gives a wonderful performance as Tony's wife. All of the cast members playing the close-knit Italian family are fantastic. But it is the two lead actors who really make this film incredible. Viggo Mortensen and Mahershala Ali are simply outstanding playing Tony Lip and Don Shirley. As a fan of both actors, personally I was excited to see them working together. And it's fair to say that the connection between these two great actors surprised with splendor and delight. Easily, career-best performances from both thoroughly deserving the awards that followed.

The Green Book could be accused of being a little overcooked, but this really would be being incredibly picky. Because the script is just wonderful, the soundscore is fantastic and the camera work is incredible. Creatively, the end result is as perfect as the music played by the maestro Dr. Shirley himself.

There is no doubt, that there is a hint of Driving Miss Daisy with this film. But it is much better in my opinion. The fact that it is based on real events truly compounds the story. These very different men from extremely different backgrounds became strong friends for the rest of their lives and even passed away within a few months of each other in 2013.

All in all, Green Book qualifies as one of those films that everyone should see. It has everything for everyone and all woven together with wonderful humor. This is a Winner of Best Motion Picture at the Academy Awards 2019 as well as countless other awards. A great inspiring story and strongly recommended – catch it on Amazon Prime as a new release in September 2019. 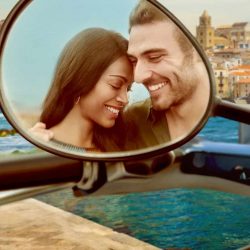