His House is a superb movie that finally gives us a reason why the couple can't leave the house as Bol and Rial must stay put or risk being deported back to South Sudan. Great debut feature from director Remi Weekes.

In almost any film you care to think of where some malevolent presence torments the main characters you will be having the same thought process: why don’t they just leave?! Get out the spooky house! Leave alone the cursed items! Stop walking into the dark spaces! His House, the debut feature from director Remi Weekes, nixes that nagging narration with a simple element. If refugees Bol and Rial leave the house they face being deported back to war torn South Sudan.

Similar to the social commentary horror movies of Jordan Peele (Get Out, Us, Candyman), Weekes imbues His House, a movie which on the face of it appears to be a simple haunted house yarn, with subtle and satisfying subtext. After spending an unclear amount of time in a detention centre, Bol and Rial (Sope Dirisu and Wunmi Mosaku) are provided with a home to live in whilst their asylum claim is processed. But they are banned from working, having friends round, or doing anything beyond staying in the house provided to them. With virtually no other characters in the movie, we follow the couple as they are unceremoniously dropped off in an undisclosed housing estate. “Is this London?” Bol later asks, only to be shrugged off with, “If you like” as a response.

Yet all is not right with this run down unfurnished house in a rough estate somewhere in England. Scuttling noises can be heard behind the walls. The power keeps cutting out. The corners of rooms are too dark. Voices whisper. The first half of the movie is full of scares as Bol’s tension level increases. The ghostly narrative is familiar but intercut with the alienation that Bol and Rial feel anyway, haunting notwithstanding. His House ensures you don’t get too familiar though as the movie starts to fall away from expected tropes.

This is the point where it is hard to continue a review without giving away the plot. Suffice to say that Bol deals with the situation very differently to Rial. Dirisu delivers a wonderful performance as a man trying hard to assimilate and be congenial. “This is our home!” he states repeatedly, determined to forget all that has happened before. Mosaku, in contrast, showcases an internalised struggle. She holds on to their own ways and is hurt and scared by dismissive locals who don’t want her there.

A wonderful turning point scene simply shows Bol proudly using cutlery to eat his dinner, whereas Rial (“It tastes like metal”) scoops up the food with bread as she would normally do. Such mundane simplicity is slowly morphed as the camera pulls further and further away, leaving the couple behind.

His House has plenty to say but does have a bit of script engineering to keep both the audience and its characters guessing. The delivery and style is extraordinary and I left the movie with many moments still looming in my mind, not least the terrifying culmination of what is demanded from our protagonists, but that didn’t stop me from also picking apart the logic of a rather glaring reveal. It doesn’t break the story or the pace, but we are asked to follow Bol and Rial’s memories in a manner that smacks of unbelievability at one point.

Putting aside the irritating brain lapse being sold to the audience, His House is one of those movies that drips with atmosphere and purpose. Whether it be open holes in the walls like wounds or beautifully stylised sections where there is more than just the house haunting Bol’s mind, His House maintains its grip on you from start to finish. Settle in and make yourself at home. 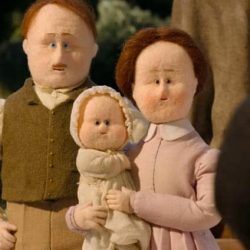 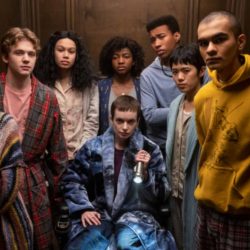 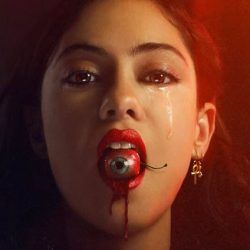