When an unexplained phenomenon sets off a series of natural disasters on the West Coast of America, a father must drive across the country in a bid to rescue his daughter from the emerging terror. Forest Whitaker stars in this new apocalyptic disaster movie from Netflix alongside Theo James and Kat Graham.

I must confess that I do love a good disaster movie. Films such as The Day After Tomorrow, Cloverfield and Armageddon are great entertainment. So I was super excited when Netflix announced ‘How It Ends' starring Forest Whitaker.

The movie starts with Will (Theo James) leaving his Seattle home to travel to Chicago to ask Tom (Forest Whitaker) for permission to marry his daughter Samantha (Kat Graham). Will and Tom's relationship is best described as fractious, Tom is a retired US Marine and doesn't care for his daughters' city slicker boyfriend. The two men end up in a heated argument before Will can ask Tom for his blessing. A dejected Will is set to return home to Samantha when disaster strikes.

The audience is never shown the true nature of the disaster, ‘How It Ends' only hints at the possible causes. Other disaster movies such as Cloverfield and The Happening use the ‘Mysterious Threat' to create a deeper sense of tension. However, in ‘How It Ends' the audience is just left in the dark. The film then descends into formulaic disaster movie territory as Tom and Will embark on a cross-country road trip to save Samantha. You get the sense that you've seen all this before, only done better in other movies. The cast is capable and the cinematography excellent. Nevertheless, it feels like the weakness of the script is working against the cast and crew. I was expecting a tension-filled rollercoaster ride of a movie, but ‘How It Ends' meanders along at a snail's pace without adding anything new to the genre.

It's such a shame that this movie didn't live up to the hype. I wouldn't say it was a bad film, it just not that good either. Better examples of the disaster genre are available on Netflix, personally, I'd recommend Cloverfield. 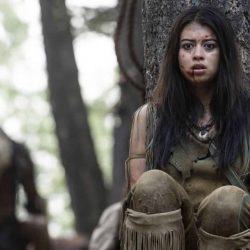