Hubie Halloween follows Hubie Dubois, a good-natured if daft man-child who believes it's his job to protect the townsfolk from the perils of Halloween. Despite the solid cast and half-decent plot, it really doesn't deliver much in the way of comedy.

Adam Sandler has churned out dozens of comedies over the years leaving all but the dedicated using his name in the credits as a great sign to avoid something. Then the gut lurchingly tense Uncut Gems came along. Most were totally blindsided by Sandler’s range and called for Academy Award recognition. And yet his latest movie, Hubie Halloween, about a clueless man child with a silly voice serves as a reminder that Sandler really doesn’t care what we think.

Wait a minute? Clueless man child? Silly voice? That’s his ’95 movie Billy Madison, isn’t it? No, wasn’t the silly voiced man child character in his ’98 movie The Waterboy? Or maybe it was 2000’s Little Nicky? In case you haven’t guessed, it was all of them. But those movies were over 20 years ago when that was still kind of a thing. Now, in 2020, Adam Sandler is 54 years old but for some inexplicable reason has decided to default to silly voice man child yet again despite it being achingly awkward to keep this trope up.

After a few minutes you’ll get a grip with Hubie Halloween. The eponymous Hubie Dubois (Sandler) loves Halloween, but his overly earnest dedication to keeping all seasonal fun chaste and proper marks him the subject of cruel pranks from mean spirited colleagues and townsfolk.

Yet with rumours of an escaped prisoner from a nearby mental institution, Hubie grows suspicious of his new neighbour (Steve Buscemi) whose friendliness doesn’t synch up with him casually boarding up all his windows. Queue a whole bunch of stars including Ray Liotta, Julie Bowen, Kevin James, Rob Schneider, Maya Rudolph, Shaquille O‘Neal, and so on rotating around Sandler for moments of screen time where the most painfully signposted jokes are dribbled out one after another.

Thankfully this Sandler man child variant is a good-natured one so on some level you do root for him. After several people go missing in spooky situations Hubie is convinced he must protect those around him, frequently using what can only be described as a ‘swiss army thermos’. As running gags go, each new attachment or function for Hubie’s otherwise unassuming flask has a fun inventive flair. Hubie Halloween’s best moments are mostly borne from surprise.

A flame-throwing thermos you don’t expect to see. Nor would the identity of a sultry voiced radio DJ be one you could guess. And, crass as they are, the various crude t-shirts that Hubie’s mother (June Squibb) obliviously wears (“I got them on sale”) do raise a smile. Yet for much of the movie it can be difficult to see where the comedy is supposed to come from.

When abuse or practical jokes are thrown Hubie’s way (as he scares very easily) the joke isn’t so much signposted as hand-delivered to you minutes in advance so you are already mentally over whatever small titter may have been otherwise elicited. I am grateful that there isn’t any of the usual fallback material used (casual misogyny, cruelty to animals, uninspired toilet humour) but, bar Buscemi’s delightfully wild-eyed performance, there are no memorable characters to hang a movie on. Julie Bowen plays ‘woman who is attracted to Hubie for some reason’. Kevin James is relegated to having comedy hair and big glasses rather than anything to actually do. Ray Liotta’s bullying of Hubie could have been cut and lifted out of any other movie.

Hubie Halloween manages to scrape back a bit of intrigue by making an effort with the all American Halloween set dressing. The suburban streets are filled with the usually OTT paraphernalia and the quasi-horror atmosphere – whilst never scary – gives pleasing visual oomph to scenes where characters are yanked backwards out of shot as if snatched by an unknown force. But just when it seems like the movie is going to enrich itself by having a subversive poke at the Halloween stereotypes (there are a lot of Harley Quinn costumes) this is abandoned as just a one or two gag backdrop.

The best thing I can say about Hubie Halloween is probably that it isn’t offensively bad. There have been plenty of, particularly American, comedies that resort to gleeful mean spirits in order to dig smelly sneers out of such wobbling mulch. Sandler (Blended) makes himself the butt of all the nastiness which even then is only of a level of childish name-calling and making him jump in fear, which he does very easily and predictably. No, Hubie Halloween is just so obvious. Stock characters lead to predictable jokes lead to a movie that sleepwalks, rather than lurches, with tired silly voice inevitability. 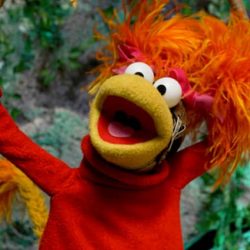