Adapted from the Stephen King and Joe Hill novella, In The Tall Grass is a horror that centers around a group of characters who find themselves being terrorised in a field of tall grass. It has some issues but overall is a tense horror flick.

The best horror movies take a very simple base fear and twist it until the terror teems out. In The Tall Grass is an adaptation of a novella by Stephen King (no introduction necessary) and Joe Hill (King’s son and celebrated author of the superb Horns and NOS4A2). King has admitted he summarises his ideas by thinking ‘what if….’? What if a teenager became psychopathically psychotic? What if a hotel made a janitor go mad? In The Tall Grass asks its own ‘what if’. What if tall grass was trying to kill you?

Ok, that sounds daft and I am being glib. In The Tall Grass is a superbly put together movie which takes a minimal cast and terrorises them. By a mysterious church in the heartlands of America lies a huge grass field. Once inside it is impossible to see over the swaying green stalks, but this grass inhabits a strange space. People entering it will find themselves moved around. As soon as you lose sight of someone it will be nearly impossible to find them again. And there is someone else lurking in the undergrowth…

We start off with brother and sister, Becky (Laysla De Oliveira) and Cal (Avery Whitted). Cal is driving the pregnant Becky across state in order to give up her baby, although she is having doubts. As they stop outside a church by a tall grass field the sound of a scared boy can be heard, who claims to have been lost in the grass for days. This gives us an introduction to the threat; Becky and Cal get separated and slow brooding shots build the tension of the green maze engulfing them. The score grows into mumbled chanting and pulsing drums. Day turns to night and other lost people emerge, all ever so slightly ‘off’.

In the first 20 minutes, you may fear that the movie will run out of steam quickly, so instead, it switches to introduce further characters. Characters like Travis (Harrison Gilbertson), the father of Becky’s baby, trying to track her down months after her disappearance; Tobin (Will Buie Jr), the young boy who shouted for help but unnervingly now seems to be able to communicate with the grass; and Tobin’s parents, both of whom appear out of time with events. And despite their directionless wandering, everyone keeps circling round to a huge and ominous black rock that looms within its own clearing.

The movie does a good job of stretching admittedly thin material out. It quickly becomes clear that events are happening non-chronologically. Warnings shouted in the present are heard in the past and bodies are discovered before the cause of their untimely ends. The time jump mechanic echoes movies such as Triangle and is effectively done.

That said, there are a few moments that smack of pacing and editing problems. Despite achieving temporary respite when fleeing for their lives two characters start throwing out the insults in a back story info dump that would have been better seeded earlier. This scene leads on to a plot vital confrontation and so the argument smacks of needing to suddenly fill in the blanks to make it work. The grass is fantastically disquieting by virtue of disorienting the characters: actually seeing it move often breaks that mystery.

Despite these complaints, In The Tall Grass has fertile soil from which to grow a tense and compelling horror. The characters are thinly sketched but performed engagingly so that we care about their fates. You may be able to scythe your way through some of the sparser elements, but green blades are right there waiting to engulf you when you pause for breath. 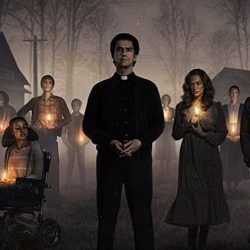 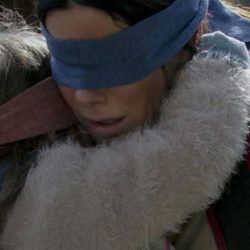