It took decades for Kung Fu movies to break into Hollywood. The documentary Iron Fists and Kung Fu Kicks charts the rise of how eastern fighting would become a movie art form all of its own.

Any action film worth its salt nowadays ensures that it features at least one fight scene where kung fu grips, kicks, and balletic punches flurry over the celluloid. But this wasn’t always so. Kung Fu’s rise to prominence in Hong Kong during the 1960s would take decades to break into Hollywood. Feature-length documentary Iron Fists and Kung Fu Kicks charts the rise of how eastern fighting would become a movie art form all of its own.

For martial art movie enthusiasts through to those whose knowledge of Kung Fu begins and ends with Bruce Lee, Iron Fists and Kung Fu Kicks does a good job of covering the origins of these movies. Mostly originating from two Hong Kong movies studios – powerhouse incumbents Shaw Brothers and young upstarts Golden Harvest – the documentary charts the fight style evolution from Peking Opera inspired grace and precision, right through to laughable blood and guts.

This is fascinatingly intercut with the social upheavals of the time. Did you know that, for a time, the genre was female-led? In a world where virtually all movie studios executives were male and it was predominantly housewives going to the movies at the time, they were concerned that their partners would lust over any heroic leading men. So, weirdly, this led to one of the first strong female lead movie stars in Chin Pe Pe. Footage of the 1967 riots is weaved in with a rise in movies about angry young men fighting the system. And also we see how, ironically, oppressed movie-going customers sought escapism by watching actors who were similarly oppressed due to the draconian control that studios had over their stars.

Once the history lesson is over, the mid-section of the docu shifts to exploring the career of Bruce Lee. Lee’s Hong Kong boom and subsequent struggles to break through to Hollywood have already been extensively documented elsewhere. Although this section goes on rather long, Iron Fists and Kung Fu Kicks manages to intertwine his rising, falling, and rising again fortunes with the wider picture of kung fu’s rising influence on the West. Grindhouse cinemas playing poorly dubbed Hong Kong movies were starting to rake in the dollars during the 80s and Lee’s posthumous fame with Enter The Dragon broke the genre into the mainstream.

After the section dealing with Lee the show does flap around somewhat for focus. Legends Jackie Chan (Bleeding Steel) and Sammo Hung are covered within the context of how lax health and safety attitudes (and limited budgets) led to astonishingly dangerous stunts becoming the genre’s hallmark. It’s odd that the influence of such mastery as Jet Li is missed out whilst there is still time to breeze past the expanding sources of ‘kung fu’ movies (such as Thai ‘Ong Bak’ and Indonesian ‘The Raid’), but clearly a directorial choice was made here.

One interesting and unexpected parallel the documentary draws is the rise of kung fu movies along with a thoroughly engaged African American audience who connected with the material in a time where cultural diversity was massively under-represented on the big screen. The era of blaxploitation movies synchronises well with the popularity of kung fu movies, and many African American talking heads reveal how hip hop moves or break dancing poses were directly inspired by far east fighting on their screens.

Despite a somewhat rushed ending and perhaps overlong section on Bruce Lee, Iron Fists and Kung Fu Kicks is stocked with great footage, great contributors (such as one guy responsible for having six Bruce Lee films in development where only three actually featured any footage of him!) and is a fun journey through one of the most enduring movie styles there is: punchy kicks! 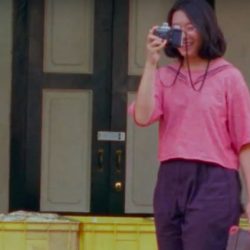