Strap yourself in and get ready for a none stop barrage of straight from the hip jokes. This is a ram packed hour, of Jimmy's favourite jokes. But be warned, if you are easily offended - probably best to watch something else.

Jimmy Carr: The Best of Ultimate Gold Greatest Hits, provides exactly what the title suggests. After twenty years of scripting amazing material, he has decided to condense all of his greatest jokes into one show. The result is a none stop, quick fire attack on the audience that shocks and challenges you not to laugh in a brilliantly blended way.

Most people would be more familiar with Jimmy Carr from his hosting of hugely popular TV shows. As guest presenter of Have I Got News for You, he delivered his super fast dry wit superbly. Which set him up perfectly to present shows like 8 out of 10 cats, Big Fat Quiz and Distraction. But the many guest appearances across a broad spectrum of shows, cement his position as a household name.

Carr carries an unassuming appearance, always smartly dressed and cropped. At first appearance, he comes across as quite posh. But underneath all of this is an incredibly dark sense of humour, which can be fired to its victim without the rise of an eyebrow.

However, his major talent lies in his tremendous skill at crafting one-liner jokes. He is a master of words, who studied at Cambridge and it shows. Carr has contributed his writing to sketches across many platforms and in Comic Relief. But it is in his stand-up shows where we get to see the real Jimmy Carr. At first, the stand-up performances seem to be in the style of the old seventies stand-up comics. But his style is far from that. Yes, the content is focused on quick punchlines but the delivery and direction are very much modern.

The focus of his jokes ranges from the outrageous, to unbelievably shocking to simple silly wit. His act has always played on his deadpan look, that flips to display a person who really does not care who he is offending. But once you settle into his imaginary world of disgust, the tempo builds like a fine backbeat to a song. Then before you know it, you are laughing uncontrollably to a proposed situation that would deeply offend and disgust you if heard via any other platform.

It is fair to say, that Jimmy Carr is someone you could dislike tremendously. He seems to pop up on every show available and unless you have seen his stand-up shows, he can appear smug and arrogant. However, if you are not that familiar with Jimmy Carr on stage. The Best of Ultimate Gold Greatest Hits is a must watch. It is very much like going and seeing a rock band live that you were never much a fan of who blow you away with their best material.

Netflix signed a deal with Jimmy Carr way back in 2015, the first British comedian to make a Netflix original performance appearing in The Fix. This is his second stand-up show to appear on Netflix, which was filmed in the Olympia Theatre, Dublin.

Overall, Ultimate Gold is genuinely funny to watch and I strongly recommend this. Just be warned, Jimmy Carr touches on some very awkward subjects and that is why this show comes with a 15 certificate. 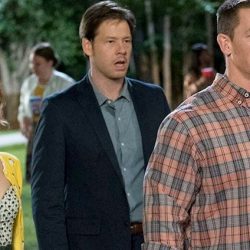