If you're looking for a new comedy to binge on then Life In Pieces is just what you need. Families, in-laws, siblings and relationships are all in the mix in this sharp and very funny comedy. Think Modern Family meets Arrested Development!

There is so much content available to stream that it's hard to know where to start when looking for a new show. Let me help you out and suggest Life in Pieces. James Brolin and Diane Wiest as John and Joan in this hilarious comedy about the Short family as they navigate the trials and tribulations of daily life.

The Short family tree goes like this. Joan and John are the parents. They have three grown-up children who are Heather, her husband Tim and their three children, Matt and his girlfriend Coleen and Greg with his wife Jen.

The show is broken down into four short stories, one for the parents and one for each of the siblings. Each is their perspective of an event – or at least an aspect of their life that ultimately ties into each episode's storyline. It means that everybody in the show gets a fairly equal amount of screen time to flex their acting chops and so very funny short stories can get told in five minutes rather than being dragged out over 20 minutes. That's also the downside because you do wish that you could see more of your favourites.

Heather (Betsy Brandt) is the oldest and has been married the longest. Tim (Dan Bakkedahl) is a dentist and the one most likely to make things incredibly awkward. Matt (Thomas Sadoski) is the middle child and in season 1 finds himself out of work and back at the family home. Then he meets Colleen (Angelique Cabral, Maggie) and he starts to get his life on track. Matt and Colleen definitely have the most ups and downs throughout the show.

Greg (Colin Hanks) is the youngest and is getting his new business venture off the ground. He is married to Jen (Zoe Lister-Jones) who is very uptight and not at all into the constant interference from other family members. Her sharp wit produces most of the hilarious moments of the show.

Special mention must also go to Sophia (Giselle Eisenberg), Samantha (Holly J. Barrett) and Tyler (Niall Cunningham) who are so good in Life in Pieces. Especially Tyler who brings home a gorgeous new girlfriend, much to the shock of everyone else.

Life in Pieces is basically a very funny look at one eccentric family. The four brief stories give everybody plenty of air time and with each sibling at a different stage in their life, the results are laugh out loud funny.

It's such a clever show and the writing is impeccable as are the offbeat stories that run through each episode and season. It's very easy watching and is mostly themed around relationships, marriage, sibling rivalries, in-laws and ultimately surviving a large family when there are so many different personalities.

In the chaos there are ultimately beautiful milestone moments in each character's life. Despite their differences, they all love each other and overcome numerous obstacles to live as one big happy family.

You're probably thinking it sounds exactly like Modern Family and in some ways it's very similar. Both are created at the same studio, both have smaller stories that revolve around a more complex family structure and incidentally, both pilots were directed by the same person.

So how is it different? It's not as manic as Modern Family which tends to always have its characters running around getting into funny situations whereas Life In Pieces is calmer and it's the dialogue that's comedic – the witty banter and interaction between the kids and their partners as they go about doing ordinary every day things.

Life In Pieces has four seasons on Amazon Prime Video. The first, second and third season each have 22 episodes. The fourth season has just 13 episodes so there's definitely plenty to get your teeth into if you're searching for new glossy comedy and I highly recommend this one. Think wacky along the lines of Arrested Development!

Is There A Season 5 Of Life in Pieces?

The short answer is no. The is no faith season for Life in Pieces. in 2019 it was announced that CBS cancelled the show.

A combination of factors, including declining ratings and the network need to clear space for four new sitcoms led to the show's demise.

It's such a shame because there was so much more that could have been explored in the series. So for now we have to say goodbye to John and Joan, Heather and Tim, Matt and Colleen, and Greg and Jen.

Headbilling in the show goes to Colin Hanks who plays Greg. Son of the legendary Tom Hanks, he can also be seen in the 2021 movie, How It Ends, alongside Life in Pieces co-star Zoe Lister-Jones.

Betsy Brandt plays Heather, the oldest child of John and Joan. She is known for her roles in Breaking Bad and The Michael J. Fox Show.

Matt is played by Thomas Sadoski who also had a lead role in the hit tv show The Newsroom. In real life, Sadoski is married to actress Amanda Seyfried and they have two children together.

Zoe Lister-Jones plays Jen who is married to Greg. During season 1 she gives birth to daughter Lark (Ana Sophia Heger) and announces her second pregnancy in the season finale. In real life Lister-Jones is incredibly accomplished and both wrote and directed How It Ends and The Craft: Legacy. They are available on Amazon Instant Video.

John Short is played by the legendary James Brolin who is married to Barbra Streisand and father to actor Josh Brolin. Most recently he narrated the hit Netflix series Sweet Tooth.

Playing the Short mother, Joan is Dianne Wiest. The two-time Academy Award winner is an acting legend and also won a Primetime Emmy for Outstanding Supporting Actress in a Drama Series for her role in In Treatment.

Is Life in Pieces Any Good?

Yes, it definitely is. It's a sitcom that you can watch over and over and still not get tired of the comedy and laughs.

Maybe you'll even relate to the various members of the family as they face all of the usual family dramas around Thanksgiving Dinner, children growing up and becoming more independent, the odd family meeting, arguing over property lines, breakups, the trauma of a lost little bunny or just the fact that you get four short stories in every episode.

Whatever the reason, Life in Pieces was cut short in its prime and should have run for longer! 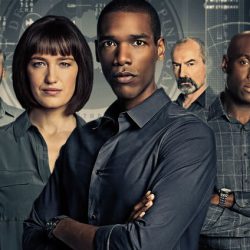