Charlotte and Fred are childhood friends who meet up 20 years later. She happens to be the Secretary of State and he's an unemployed writer, but when she hires him for her team this mismatched couple soon finds they have plenty in common and sparks fly. Solid romcom with Charlize Theron and Seth Rogan

Originally released in cinemas in 2019, Long Shot, starring Charlize Theron and Seth Rogan is now available on Netflix. So what's it all about? Theron stars as Charlotte Field, the Secretary Of State in the US. She works for the President, a woefully underqualified tv actor who really doesn't have much grasp on the job. When he tells her that he will not be running for re-election, Charlotte sees her chance to step up and run herself. But she needs his endorsement to do it.

She also needs to boost her profile to increase her chances of becoming the first female President. So she develops a new global environmental initiative and embarks on a 20 country tour to promote it. She also needs a new staff writer, somebody who can increase her likeability. Having run into her childhood friend, Fred Flarsky, she decides to hire him for the job. But Fred (Rogan) isn't exactly conventional and has no experience in the political world. As the two work closely together the inevitable happens.

Of course, the path to true love between the Secretary of State and her stoner boyfriend is peppered with obstacles. He doesn't look, sound or act the part, which is why she really likes him. But image and perception are everything and soon Charlotte must choose between her ambitions and love. So which will win out in Long Shot?

As romcoms go, this isn't the usual tropey nonsense that gets churned out all too frequently. She's not unlucky in love or desperate for a man to save her from her wretched life. She is an educated, accomplished and ambitious woman who just happens to fall in love. Sure, on the surface they're a bit mismatched but that's part of the fun of the movie. And it's a good film. It's very funny, with some sharp social commentary dropped in to give it a bit of an edge.

The cast is excellent with June Diane Raphael, O'Shea Jackson Jr., Ravi Patel and Bob Odenkirk (Better Call Saul) making up the supporting roles in fine style. There are some parts that are a little ludicrous but overall it's a clever feel-good comedy that is well worth a watch. 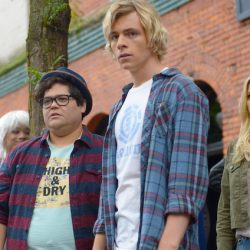