How would a wedding turn out for all the guests if the table plan was different? That's the question for Jack as he tries to save his sister's wedding from being ruined all while pursuing the love of his life. Love Wedding Repeat is a not so funny or romantic rom-com.

I've always assumed that the two important components for a rom-com are romance and comedy. Unfortunately, Love Wedding Repeat is sadly lacking in both. Despite a decent cast that includes Sam Claflin and Olivia Munn, it falls flat almost from the moment it begins. The movie opens with a befuddled Jack (Claflin) trying to convince himself that he has the guts to kiss Dina (Munn). Just as the scene is set some random guy he used to know interrupts them and there ends the moment and the two-part ways without ‘the kiss'.

Fast forward three years and Jack's sister Hayley (Eleanor Tomlinson) is getting married in Italy. He soon discovers that Dina will also be there and sees it as his chance to finally get the girl of his dreams. But the wedding is about to go off the rails with the arrival of Hayley's ex Marc, who is drugged off his head and professing his undying love for her. In order to rescue her wedding day she convinces Jack to drug Marc so he sleeps through most of the day.

It doesn't work. The glasses get mixed up and another guest ends up sedated, throwing the wedding into chaos as Marc decides to ruin everything. At this point, the narrator of the story interjects with a random hypothesis of how things could have turned out if the eight wedding guests had been seated differently at the table. Cue a montage of alternative scenarios and outcomes as the guests constantly swap places. So what you get is the Love, the Wedding and the ‘Repeat' as the wedding reception starts all over again with a different outcome.

On that basis, the concept is actually ok. It's like Sliding Doors but with a wedding. It's the idea that something as simple as a table plan can significantly affect the outcome of people's lives. The problem is the script. It's awful. Peppered with really cringe-worthy jokes that don't land and long, long pauses, you'd be forgiven for thinking the entire thing was ad-libbed as an experiment.

For his part, Sam Claflin (Adrift) seemed to be channeling 90s Hugh Grant with the whole awkward bumbling English thing going on. Olivia Munn doesn't have much to do other than to be the object of affection and Aisling Bea (Living With Yourself) is uncharacteristically unfunny. The whole movie is just a mess. That said, some viewers liked it. It's a love or hate movie and I did not love it. I could barely finish it and that was only so I could write this review!

Better romcoms include Isn't It Romantic, Set It Up and Always Be My Maybe. 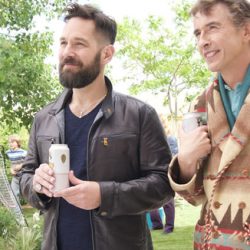