Vincent van Gogh's life as you have never seen it before. Loving Vincent was a joy to watch and it is doubtful anyone will go to such efforts to make such a movie again. Enjoy it while it is available to stream on Netflix and let yourself get lost in the oil.

Just when you think you have seen every type of animation going, a literal masterpiece like Loving Vincent comes along. This is animation on a painstaking scale. Every frame of the movie is hand-painted using oil paints and canvas. Even co-director Hugh Welchman has confessed that this is “without a doubt … the slowest form of filmmaking ever devised in 120 years”.

But what gorgeous work it is. The movie covers the last few weeks of Vincent van Gogh's life before his apparent suicide. It is told through the recollections of several who knew him. Armand Roulin is the son of Vincent’s postman, Joseph Roulin. Joseph is voiced by Chris O'Dowd from The Incredible Jessica James. Armand is tasked by his father to deliver a letter from Vincent to his brother Theo, that, over a year since Vincent’s death, has just been discovered. But when the initially reluctant Armand learns that Theo is also dead, he searches for a suitable person to deliver the letter to. In doing so finds out more and more about this complicated and troubled man. Was it suicide? Or were other forces at play?

At first it is hard to get over the sheer astonishment at seeing a ‘live-action painting’ swoosh past your eyes in hugely colourful brushstrokes. That said, some of the ‘walking through town’ shots can get a tad headache-inducing. And just when you get used to it, the scene will do something utterly mesmerising. It will morph from windblown trees and cloud blooms into a Parisian scene with cobbled street and brightly lit cafés.

Or it will show a transparent face in the reflection of a train window with the scenery zooming past. Hay fields sway in the breeze, bistros are full of life, and Vincent’s room is both a secluded haven and a claustrophobic tomb. And the fact that this is all done in Van Gogh’s distinctive style makes for a total delight of visuals. Come the end credits the movie also reveals the various real paintings that were the basis for the look of each major character, which is a lovely touch.

The narrative itself is fairly standard. Though it does strike extra hard when you know that the tales told to Armand are all based on real accounts. Armand is the proxy for the audience. At first he is just in it for a simple answer. But more and more time is invested as the contradictory accounts pile up. And just when you think that you’ve got what happened to Vincent sussed out – he staggered back from a local field having been shot in the stomach at an angle improbable for self-infliction – another person tells their tale to Armand and adds another layer of possibility.

For someone like myself who knew nothing about Vincent van Gogh’s life, the mystery (whether conspiracy theorist or not) had me hooked throughout. Vincent himself is given the ‘tortured genius’ angle, but not in an exploitative way. The movie subtly and respectfully tells the simple tale of troubled man through the conflicting accounts of those who met him, and leaves it up to you to decide.

The actors were filmed in front of a green screen and then superimposed over the canvases for one of the 100 strong team of artist animators to paint over. The result is very convincing and at several times I was sure that I was seeing a live face, until a subtle change of angle would reconfirm that it was an impressively detailed painting! It is beautifully scored and used multiple aesthetics.

It doesn’t shy away from switching styles from the thick colourful oils to a harsher grey charcoal smudge when dealing with Vincent’s depression or battles with mental illness. Loving Vincent was a joy to watch. It is doubtful anyone will go to such efforts to make such a movie again. Enjoy it while it is available to stream on Netflix and let yourself get lost in the oil. 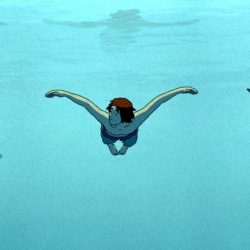 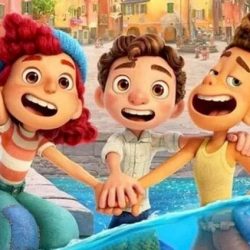