Another solid horror from James Wan, Malignant follows Madison who discovers that her visions of grisly murders are in fact terrifying realities. But can she make them stop?

Something about the prevalence of dull as dishwater movie posters with very predictable layouts has lulled us into a state where interest in a movie can be sparked alone by something different. The Malignant poster, with a terrified side-on face and a red stylised ‘I' that looms over the eye like a blinding Sword of Damocles, made me sit up and take notice on that striking image alone.

I went in blind is what I am saying. I fired up the movie armed only with the knowledge that the director was James Wan (Saw, Insidious, The Conjuring, Annabelle Comes Home) and the suspicion that I was probably in for a bombastic ride.

Nearly two hours later I would describe that ride as one which lurches you through lame corners trying to jolt a response, before disconnecting with the rails altogether and sailing through the clouds for a heart walloping finale.

Like Insidious before it, Malignant starts big and bold. It’s a hospital. The walls are getting an unwelcome mahogany paintjob. Lights are flickering. Radios are hissing.

Cut to years later and Madison (Annabelle Wallis) is not only worried her pregnancy is in trouble (again) but has to contend with a blunt force injury to the back of the head when her abusive husband shoves her.

Good (?) news though – after a series of spooks in the night the husband is a corpse. Bad news? Madison is under suspicion by the cops.

Much of the next two-thirds of the film is spent laboriously putting together the jigsaw pieces of what is going on. More bodies stack up, all seemingly associated with Madison’s mysterious past.

A black coat wearing deformed attacker named ‘Gabriel’ is slaughtering with unbelievable speed and strength, which surely can’t be related to Madison’s childhood invisible ‘Gabriel the Devil’ voice in her head, can it?

The sharp camera angles and direction for every actor, to go pretty much all out, at all times makes for an exhausting watch, even if it is staggered with brief moments of satisfyingly visceral splatter.

As a result Malignant struggles to ever really reach ‘scary’ when rummaging around your brain for emotions to light up. ‘Daft’ is more like it.

The supporting cast is neither here nor there, aside from both emotional and plot support from Madison’s sister, Sydney (Maddie Hasson).

Yet this is simply stated in the flat dialogue rather than felt. Even the characters seem to be determined to grit their teeth and get through the required amount of events.

Is Malignant Worth Watching?

Yet the thriller aspect of Malignant is but a mask obscuring a truly unforgettable shift into bonkers body horror B-movie territory.

Up until this point, the conceit has been Gabriel’s oddly jerky movements and ravaged face. Staggering over the thriller genre, both Madison and we the audience are locked in place whilst she has paralyzingly horrible visions of Gabriel killing people as they are being killed.

Tired of being jerked around, the cops throw Madison into a jail cell whereby a wrong look gets her on the wrong end of the inmates’ boots.

This very much represents where Malignant throws off its ‘thriller’ cloak and dives headfirst into ‘horror’.

Wan lets loose with the kind of cackling abandon that makes you want to slap him for holding it back for so long, although you’d have to do so under an umbrella due to the amount of blood that tsunami’s about the place.

Fans of movies that stack a conga of characters against an unstoppable force will take great pleasure in just how nastily said sacrifices get ripped apart.

All this makes Malignant hard to assess. The gear shift is so deliberately like a rabid dog yanking at its leash, except the dog is in another room and you barely get a sniff of it until it comes barrelling through the woodwork and tears into your ankle.

Once the credits roll you will have plenty of material to gabble about with your friends, but on rewatching the desire will be very strong to simply fast forward to the midway point and go from there.

James Wan glories in homage to the grisly horrors of his youth and does so with such an incredibly unsubtle lump hammer that you can’t help be in awe of his garish gusto.

Few movies get the chance to slam from second gear up to a gearbox destroying top end and I left Malignant deliriously happy at having witnessed something so stand-alone nuts.

If you can put up with the headache that Malignant inflicts for the first half, then the pressure from within will be released with torrential fury. 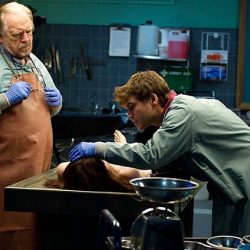