He-Man is back. Or is he? Masters of the Universe: Revelation breathes new magic into the world of Eternia largely because He-Man and Skeletor are not really in it but it's stylish and exciting and gives the other characters a turn to really shine.

Reboot or reimagine? Redo or renew? Repetition or revelation? When digging up a beloved but undeniably old fashioned franchise what approach is best? Regardless of the angle taken there needs to be a story worth telling, otherwise why bother? Masters of the Universe: Revelation breathes new magic into the world of Eternia and its famous protector, thanks to director Kevin Smith’s smart decision to tell a story mostly in the absence of the realms’ most famous protector.

Yes, there is very little He-Man in this He-Man based show. You can bemoan the cynical approach of heavily featuring a popular character in promotional materials only to then swiftly bin them off, but Masters of the Universe does well to step out of the swaggering and bulky shadow of its most famous occupant. In anticipation of such an approach riling up the fanbase, Episode 1 packs in plenty of muscle rippling battles just so you can get your fill early.

Powerhouse Animation Studios have taken clear inspiration from Japanese Anime stylings, in both the art direction and energy of movement. The rather laughably poor quality of the original show is rightly consigned to the annuls of history. A bellowing cry of “I have the power!” reaps riches of the light fantastic, whilst He-Man and his way more iconic foe, Skeletor (Mark Hamill), have at it with sword and staffs a plenty. When the going gets violent, the violence certainly gets going (though bloodless and child friendly, of course).

Through its short 5 episode run, Masters of the Universe does the almost unthinkable and throws away the crutches that would have supported a typical He-Man plot. With He-Man and Skeletor out of the picture, the Sword of Power seemingly destroyed, and magic draining away from the land of Eternia, what is left is space to work with. Free from your typical back and forth battles at Castle Greyskull (also virtually done away with) the series focuses instead on the warrior Teela: stung by being kept in the dark about He-Man’s true identity by everyone she knew, she has found work as a mercenary for hire out in the wider world.

It is in the quieter moments that Masters of the Universe: Revelations really stands out. An impressively talented voice cast imbues the unexpectedly sombre and reflective scenes with a vulnerable human quality that was hardly abundant in the source material. Teela (Sarah Michelle-Gellar) leads the cast in a bull-headed kind of way. Yet her dubious deal struck with Scare Glow (Tony Todd’s iconic voice as Lord of the Underworld) gives flesh to her fears in a way that provides richer context. Similarly, many of the best moments come from sorceress Evil-Lyn (Lena Headey) and Orka. Unshackled from their limelight hogging bosses, their ruminations on past failures and personal hang-ups give real nuance to a show not generally known for subtleties.

Not every character gets the three-dimensional punch up though. Man-At-Arms (Liam Cunningham) is sidelined for most of the show except when needed to facilitate a last-minute rescue (something that happens a little too often), and Teela’s co-mercenary companion, Andra, is in plenty of scenes without ever particularly enriching them or having anything memorable to say. Masters of the Universe gifts moments of sombre introspection to some, whilst reserving everyone else for old fashioned quest fodder.

Don’t read this review and think that a He-Man series has gone all ‘woe-is-me’. Far from it. A litany of classic baddies get entertaining scenes to fill with colourful nonsense. Whether it be Tri-Klops (Henry Rollins) leading a magic hating techno cult; Mer-Man (Kevin Conroy) whinging about disrespect; or Stinkor (Jason Mewes) guffing up the place, there are fights and fantasy aplenty. The animation brings them to life with a style that holds true to the classic show, but yet is brimming with modern energy and verve throughout.

If you go into Masters of the Universe wanting a He-Man show then you will be sorely disappointed. But then the hulking slab of muscle whose yells of “I have the power!” solving most problems is hardly the most interesting character to drive a narrative. It’s a shame the show also does away with its most cackling villain at the same time, but in the absence of Skeletor and Prince Adam, Masters of the Universe: Revelations crafts something refreshingly new. I hope the upcoming season 2 resists the urge to revert to the standard formula. Even if it does though, these 5 episodes have enormous fun in breaking the mould. Maybe lightning will strike on command again? 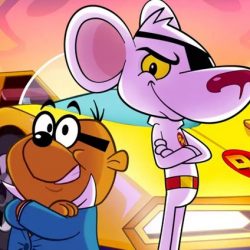