There is power in the person behind the pulpit. When lifting your face to someone speaking with confidence your mind is always receptive and ready to listen to the word. In Midnight Mass the enraptured community is a small one. Crockett Island may be a tiny offshore fishing island suffering from a dwindling population, yet those left behind are reinvigorated by placing their trust in a charismatic new priest, Father Paul Hill.

It’s Father Hill whose word everyone hangs on during these 7 limited series episodes, yet series creator and director Mike Flanagan has millions of Netflix viewers just as wrapped around his little finger.

He already made a name for himself with rich and varied horror films such as Oculus, Hush, Before I Wake, and Gerald’s Game, yet it was the edge of seat slow burning nail biter that was The Haunting of Hill House that has led to his name on any project meaning a guaranteed level of interest. Midnight Mass continues his brand of character driven work that drip feeds you into an insatiable hunger.

Our collection of characters that make up Crockett Island are some of the usual Flanagan cast plus a few newcomers. Chief among these is Riley Finn (Zach Gilford) who has returned to the island after serving 4 years imprisoned for killing a young woman in a drunken car accident. Having lost his faith and struggling to reintegrate in a predominantly Christian small community, he provides a mumbled and muted presence of broken pride around which events can slowly escalate.

All is not gospel on Crockett Island. Despite the unifying words of Father Hill (Hamish Linklater), some people will take more convincing to hear the good word, especially when there is the divisive judgement from mother of all busy bodies, Bev Keane (Samantha Sloyan) to contend with.

Sherriff Hassan (Rahul Kohli, iZombie and Happy Anniversary) has to double up as general store manager when not gritting his teeth at the passive aggressive comments he gets for being, along with his teenage son, the only Muslims on the island. And there is gnarled drunk, Joe, drowning his guilt at accidentally putting young Leeza Scarborough in a wheelchair.

As proven by Flanagan’s other work, where Midnight Mass shines brightly is excellent character focus. The actors all lean in to their roles superbly. Riley’s lowered gaze skilfully skids away from being monotone, because his shrunken humility makes perfect sense with the guilt he is dealing with. His long standing attraction to pregnant but single, Erin (a returning role for Kate Seigel, Hypnotic) gives both actors plenty to work with.

Gorgeously framed shots and long lingering zooms give many aspects of the show an almost theatrical production and Seigel, with plenty of script to sink her teeth into, delights in her scenes as a woman barely hanging on but doing so with steely determination.

Yet even though these are the qualities that Flanagan is rightly praised for, Midnight Mass will frequently test your patience. Each episode is over an hour long and feels it, as they all have multiple page monologues that I wouldn’t advise trying to power through if you are tired and liable to drift.

The writer’s pen hangs heavy over many scenes. Flanagan gives deliciously written line after line of dialogue to actors who relish the ability to really perform. But as yet another 5 to 10 minute essay soliloquises without end, the term ‘slow burn’ is scraped out into barely crackling embers.

The main mysteries will keep you wanting to get to the next instalment, certainly. What does Father Hill really want? Why are people slowly healing from past injuries? Why do all the cats from a nearby island wash up dead? What’s the unseen thing with the glowing night eyes?

Midnight Mass provides plenty of communion to swallow, but at times the sermon to get there can seem like a unnecessary drone. Success breeds looser reigns on creators and there is no denying the talent of the craft, but a firmer hand on the editing knife could have trimmed the show into a leaner meal.

A few distracting quirks aside (and the clearly young people in ‘old person prosthetics’ is pretty darn distracting), Midnight Mass is a slow walking procession where the methodically lit candles are carried onward by its cast with a doomed finality. It takes a nurtured religious fervour through twisted logic and hypocritical supplication, dropping in doses of classic horror that skulk away from sight. But once the last two episodes coalesce in choral harmony, there is none left bloodier than those seeking to wash away sin in worship of self satisfaction. 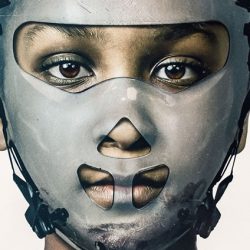