Combining ‘choose your own adventure’ and the ever-popular Minecraft video game gets you Minecraft: Story Mode where you get to choose your own path in this interactive series.

Many a happy moment was spent with THIS reviewer’s childhood in the embrace of ‘choose your own adventure’ books. The ability to take control of a story’s narrative and test out the results of multiple choices was highly addictive. As was using a finger to mark your place in case you had to yell “mistake!” and backtrack sneakily.

Back before Black Mirror: Bandersnatch grabbed all the attention, Netflix made the decision to drop Minecraft: Story Mode, where, similar to Battle Kitty, you the viewer got to construct your cannon.

The series is essentially a port of the PC game created by Telltale Games, in turn created off the back of the phenomenally successful build-em-up Minecraft video game by Mojang. The original game features a nameless place where you essentially destroy resource blocks to craft other resources, making it a kind of Lego style sandbox where you could make whatever you liked. There was no real narrative to it, hence Minecraft: Story Mode created just that: a story.

In this Netflix port most of the gameplay elements have been stripped away (no dialogue trees to make informed decisions, no puzzle solving, no item collecting) leaving only the ability to make binary choices at key moments in order to shape the story. Lead character Jessie (Patton Oswalt, Happy!) starts off as an everyman but grows after gathering some friends to go in search of the legendary Order of the Stone, a group of heroic adventures responsible for many famous deeds. As the episodes progress, we learn that what passes for legend is often divorced from truth, all the while shaping how we get there.

Clearly already being into Minecraft helps here as otherwise the blocky aesthetic, strange construction logic, and world filled with deadly monsters such as Endermen and a Wither Storm, may leave you scratching your head. The decisions you make are probably around 70% just tonal dialogue choices (do you criticise or query the person in front of you?), but that leaves 30% of choices that do impact on the story and can lead you to success, failure, or other lasting implications that carry over to other episodes.

Undoubtedly the appeal is mainly for Minecraft fans but by transposing the Telltale Games adaptation into a simplified Netflix series the whole thing becomes very accessible and quite comfortingly enjoyable. The voice cast all deliver very engaging performances and the plots are very watchable whether our gang be searching for the ‘Ever Source’ on a floating island where resources are scarce, exploring trap laden dungeons, or battling a huge all consuming beast. If you make a mistake you can get a do-over or simply select past chapters to try a new path. The time between choices is short enough that this isn’t laborious, and the script is strong enough that starting again doesn’t grate, either.

A few other Netflix shows have gone with the Choose Your Own Adventure take (see The Last Kids on Earth as a recent example) but the pre-existing ‘game’ part of Minecraft: Story Mode means that the fun is baked in, and although Telltale Games folded back in 2018 there is a decent whack of content here with Season 1 consisting of 8 interactive episodes and Season 2 consisting of a not too shabby 5. Kids will love it, and, if you craft out some time to join in, you probably will too. 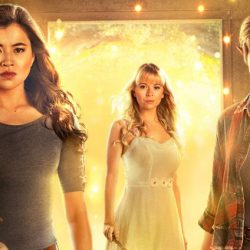