Agatha Christie meets Murder She Wrote in this quirky crime series set in 1920s Australia. The very wealthy Ms Phryne Fisher soon turns detective solving a vast range of crimes with her seemingly unending set of talents. It's fun and binge-able with enough plot lines to keep you watching.

Who doesn't love a good murder mystery? Think Agatha Christie, in Australia and with a very sassy and progressive Lady Detective and you have Miss Fishers Murder Mysteries! Based on the novels by Kerry Greenwood, the show is a mixture of quirky crime solving but with an edge of social commentary.

Set in Melbourne in the 1920s, Miss Phryne Fisher is the detective in question. She has returned from London after the war and soon finds herself slap bang in the middle of a murder. Attempting to help solve it she discovers she has quite the knack for detective work. Befriending the local constabulary, in particular, Detective Inspector Jack Robinson her crime-solving escapades are well underway.

With her side-kick Dot, her housekeeper, Mr. Butler, and the aid of two cab drivers, Sid and Bert, she has a ready-made team. What makes Miss Fishers Murder Mysteries stand out is that it is set in a time when women in the police force were a rarity. Certainly, there were no female detectives.

This is both a hindrance and a help and bucking the social norms of the time is a fundamental part of the show. Miss Fisher is no wallflower and her formidable attitude is what drives the series. As does her relationship with Jack Robinson which arcs through all three seasons. All of which are now available on Netflix.

Miss Fishers Murder Mysteries is an easy watch. It's like Murder She Wrote but 1920s Melbourne so wherever Phryne goes, murder soon follows. Essie Davis plays the lead and does so with plenty of flair and sass. And the script is witty and clever with plenty of humour and drama in equal measure.

If you like relatively light-hearted crime shows and fancy a decent binge, then Miss Fishers Murder Mysteries could be right up your street. 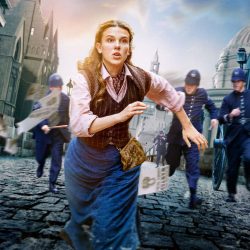