Not for the weak hearted, this brutal hard-hitting biopic of Lenny McLean otherwise known as the Governor. Tells the harsh story of his upbringing and follows the build-up to his fights with Roy Shaw.

My name is Lenny provides a harsh look into the world of bare-knuckle unlicensed boxing in the 1970s. Lenny McLean became known as the Hardest Man in Britain. He was an icon of the criminal underworld of Londons East End during the 1970s. Also known as ‘the Governor' he was associated with the likes of Charles Bronson, Ronnie Biggs and the Krays. In his later life, he became famous for an acting role in Guy Ritchie's Lock Stock and Two Smoking Barrels. His presence on the screen provided the raw menace that provided the realism that Richie was looking for.

The film takes a look at the early years of Lenny's life. It focuses on the three fights that he famously had with Roy Shaw, to claim the title of the Governor. Lenny McLean was severely abused as a youngster and this film holds nothing back when exploring the reason behind McLean's extremely violent nature. This movie is not for the weak hearted. The viewer is exposed to a man with severe psychological problems compounded by excessive drinking. At times the film is quite disturbing. It depicts extremely brutal fighting scenes but also focuses on Lenny's interactions with those around him.

Although this film is very violent, it is entertaining and shot in a way that has a true 1970's authentic feel about it. The cast is great with Josh Helman providing a suitably terrifying performance as Lenny. He captures the inner battles that Lenny had during this period. Chanel Cresswell is brilliant playing Valerie McLean. Charlie Palmer Rothwell does a great job playing Carrots McLean and John Hurt is excellent in what became his final performance. The standout performance comes from Martin Askew. He plays Lenny's stepfather in some extremely challenging scenes.

All in all, this is a truly stylish British movie. It provides a raw view of the unlicensed boxing world in the 1970's. It focuses on the lows of Lenny's life as much as the highs providing a brutally honest look at this terrifying larger than life character. If you can put up with the violence and the hard fight scenes, this is a truly captivating movie to watch.

Update: Unfortunately, My Name Is Lenny is no longer available on Netflix. You can rent it on Amazon but it is not included with the Prime subscription. 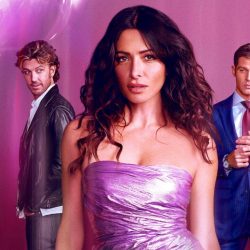