Next Gen is a beautifully animated movie from Netflix. Forming an unlikely friendship, the rebellious Mai and robot 7723 must save the world together making some tough choices along the way in this action-packed yet emotional film. Along the lines of Big Hero 6.

While Netflix didn't create Next Gen, they acquired exclusive rights for the movie for $30m. That makes it one of the biggest animation movies to come from the streaming service to date. Voiced by John Krasinski, Charlyne Yi, Jason Sudeikis and Michael Peña, Next Gen gets released on September 7th 2018. It is based on a comic by artist Wang Nima and was made by Toronto-based Tangent Animation.

Next Gen tells the story of an unlikely friendship between a rebellious girl, Mai, and a runaway combat robot of the future named 7723 as they battle the evil CEO of a tech company who is bent on world domination. The twist is that 77723, the robot, is broken and forced to discard its memories every night to survive. As the story progresses 7723 must choose between the memories he cherishes and the weapons he needs to defend it. And Mai must choose between saving her friend and saving the world.

Next Gen is an incredibly clever film. It uses the opening credits to chronicle Mai's life so we quickly get to understand how she transformed from a happy little kid to a far more rebellious girl. From her father leaving, to her bullying at school we get to know Mai and her motivations within minutes of the movie starting.

Set in the future, the animation in Next Gen is incredible and could easily rival any offering from Pixar. From hovering self drive cars to robotic hairbrushes, no detail has been over looked in this terrific film. But what elevates Next Gen is the characters and their interaction with each other.

This is a profoundly emotional film. It is so easy to relate to Mai, who is used to being almost completely ignored by her mother. You can feel her angst and frustration throughout the film and the evolution of her relationship with 7723 is just perfect. Interestingly it has been given a 12 rating. But I suspect that's more to do with the level of understanding smaller children may have about the film's themes as opposed to any unsuitable content.

Overall, Next Gen is a great movie and one for families as it's as engaging for adults as it will be for children. It has drama, is poignant at times but it will make you laugh and fall in love with Mai and 7723 as they try to save the world. A big thumbs up for movie night with the kids. 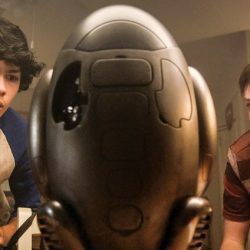