Lou rises from petty thief to successful businessman by discovering a knack for filming crime scenes and selling the footage to the local news network. Then the demand for good footage increases – and with increased demand comes the question of supply... A standout performance from Jake Gyllenhaal.

Starring Jake Gyllenhaal, Nightcrawler is the first feature film by screenplay writer Dan Gilroy. Principally it deals with Lou (Gyllenhaal), who rises from petty thief to successful businessman by discovering a knack for filming crime scenes and selling the footage to the local news network.

But much darker than this, the movie also explores the symbiotic nature of news supply and demand. When audiences lap up violent crime news stories and networks see a rise in ratings, then the demand for good footage increases. And with increased demand comes the question of supply…

Gyllenhaal’s Lou is quickly established as untrustworthy but with the gift of the gab. Whilst he goes to further and further extremes in order to obtain valuable footage, Gilroy cleverly shows him assaulting a security guard and stealing his watch in the opening scene. Lou doesn’t get corrupted by the ‘nightcrawler’ business, the darkness was already there.

Gyllenhaal’s performance is extraordinary. Physically lean and facially intense throughout, this is a character with a deep hunger for success and recognition. Lou is pure anti-hero. When he speaks there is a slight pause and bulging of the eyes which betrays a survivor’s intelligence. And as he increasingly manipulates crime scenes to get more valuable footage the film begs the question: is this man amoral, or simply the embodiment of capitalist opportunism?

Indeed, supply and demand of the news cycle is a central theme throughout; self-absorbed and self defeating. Morning news director Nina (Rene Russo) knows that violent crime brings in the viewers. But only the right kind of violent crime. “A car-jacking in Compton isn’t news,” she says. The main angle she is interested in is ‘urban crime spilling into suburban areas’. Affluent white people suffering from low-life crime gets the ratings up (the more graphic the better).

Armed with this knowledge Lou ensures that he brings her exactly what she wants. Even if the chosen narrative behind how he got the footage isn’t true. Even if he leaves out key parts of what he sees in order to get more footage later – never mind the risk posed to innocent bystanders. This really is a standout performance for Gyllenhaal. He has an undeniable ability to play disconcerting and unnerving characters, including his role in Prisoners with Hugh Jackman (review here), and was nominated for several awards for this one.

Russo plays her role with commendable vulnerability. Her job security is at risk and ratings need to go up. When she directs the anchors on what to say during live broadcast her desperation is bubbling under as she instructs them to increase the fear, over-egg the danger, and whip up the audience into a frenzy. Nina’s strength seems unassailable, until Lou bargains from a position of utter strength. She needs him more than he needs her, and when Russo’s walls crumble to Lou’s demands the result is subtle but powerful.

Set in Los Angeles, the film itself looks gorgeous. Ordinarily you would expect to see gutter dirt and noir rainfall for a film with this kind of theme, but Gilroy instead purported to direct the movie like a nature documentary. Wide angled night shots show a living breathing city, but do not focus on the human element. Street lights, endless cars, corner blocks. This is a place alive with activity on the fringes of shot, implying that Lou is stalking the night in search of prey.

Underlying all is a wonderfully ominous electronic score. Unlike most thrillers that will swamp the screen with mood leading blares to heighten stress, instead Nightcrawler features what appears to be an upbeat affair. The melody is bracing, urban, and vibrant. But it is also loaded with discord, again underlying the central theme of the film. All is not right here. Things aren’t as they seem.

Lou’s success leads him to hire Rick (Riz Ahmed), a homeless young man utterly reliant on Lou, even after it becomes abundantly clear that this isn’t a man on which to rely. Ahmed’s portrayal of the relationship also smacks of the nature of capitalism. Fear keeps you in line. You do what you must to earn a buck. Ahmed is initially subservient and in awe of Lou’s constant patter, but he looks deeper at his employer as his questionable actions rack up.

With a limited cast and excellently balanced script, Nightcrawler is compact and purposeful. Every scene has drive and every performance has strength. It’s easy to see why it was nominated for an Oscar for Best Screenplay because I was hooked throughout and felt that the message about the negative feedback loop of media was well handled without being too front facing. Lou may be a Nightcrawler, but it was the quick fix consumer nature that dragged him through. 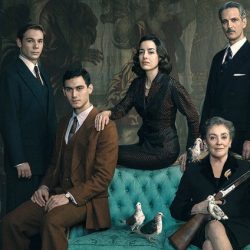