Danica has her life together until her sister, recently out of prison, comes to live with her and turns her world upside down in Nobody's Fool. Painfully long and unfunny movie that has almost no redeeming qualities!

When I saw a comedy cast that included Tiffany Haddish and Whoopi Goldberg, I sort of thought it was going to be good. I was wrong. Very, very wrong. Nobody's Fool is hands down one of the worst films I've ever had to endure. When it started with a woman answering her phone, and the camera never once panned away from her breasts, I thought ‘really???'. Said woman then decides to dance around her apartment in her underwear because I mean, who doesn't right? But rather than simply eye-roll to death I decided to give Nobody's Fool the benefit of the doubt. I still don't know why.

In a nutshell, Danica is a high-level ad agency exec. She has her professional life together but has struggled since her ex left her. However, she has a boyfriend, she has just never met him. Together for a year via the phone only, ‘Charlie' claims to work on an oil rig where reception is sketchy. In the real world, she has a flirty relationship with a coffee store owner Frank who seems very nice.

Then her sister Tanya gets out of prison after a five-year stint and must live with Danica. Tanya is played by Tiffany Haddish and if ever there was a role so wrong, it's this one. Every single awful trope and cliche ever invented to label black women is embodied in Tanya. I get that she was supposed to represent the opposite of her sister but it's soooo over the top, crude, and un-funny that I have no idea why Haddish would take the role. She's much better in Night School btw.

But I digress. Back to Nobody's Fool (sadly). Tanya doesn't believe that Charlie exists so she gets the ‘Cat Fish' guys in to prove her right. And when they do, a heartbroken Danica decides to forget all about him and give Frank a chance. And rather than put us all out of our misery and end the movie there, director Tyler Perry decides to drag out the pain a bit longer. In fact, this film runs for nearly two hours, so there is a LOT of unnecessary plot twists. All of which you can avoid if you simply don't watch it.

I really wish I could throw a few redeeming qualities into this review. I simply can't think of any. The story, script, plot, and characters are all lazily put together which is a real shame because it could have been good if the creators had bothered to put any real effort into it. 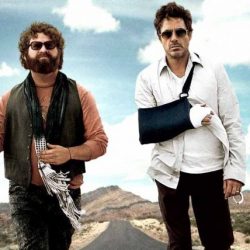